Posted on March 28, 2013 by homeschoolbookreviewblog 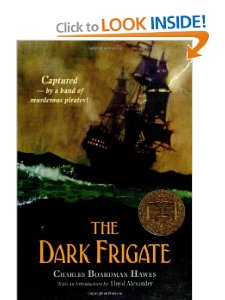 Hawes, Charles Boardman. The Dark Frigate (originally published in 1923; republished in 1996 by Little Brown and Company, a division of the Hachette Book Group, 237 Park Ave., New York City, NY 10017). In seventeenth-century England, nineteen-year-old Philip Marsham’s mother had died when he was young, and his ship captain father Thomas raised him on the sea. Philip would have been with his father when Thomas’s ship went down and he was lost, but the son had become ill and was being nursed in London by his father’s hopeful fiancée Moll Stevens. But an unfortunate accident forces him to flee London. He meets up with a couple of sailors headed for a ship at Bideford, and Philip goes with them. Along the way they stop at an inn where he meets Nell Entick and they agree that he will return to marry her. At Bideford, he signs on with the Rose of Devon, a dark frigate bound for the quiet shores of Newfoundland. However, the ship is seized in midocean by a devious group of men plucked from a floating wreck, the Captain is murdered, and Philip is unwillingly coerced into joining these “gentlemen of fortune” or pirates on their evil activities. What will happen when they are caught and Philip is brought to trial? And will he ever see Nell Entick again?

This book won the 1924 John Newbery Medal. In Hand That Rocks the Cradle: Good Books to Be Read Aloud to Children, Nathaniel Bluedorn recommends it thus: “Young Philip Marsham sails on the ship Rose of Devon, which is captured by a ‘gentleman of fortune,’ a pirate. Philip is forced to become a pirate himself and accompanies them on their murderous expeditions. The pirates are captured and Philip is put to trial. A classic tale of adventure.” However, in And the Winner Is…: A Guide to Newbery Medal Winners from a Christian Perspective, Barb Brandes or Deb Ekstrand wrote: “I was shocked that this early Newbery Award winner was on the list, based on its content. The main character is not a boy, but a 19-year-old man with an eye towards comely women. The murderous adventure yields a grisly tale of implied torture and women unlikely to win chastity awards. I love a good maritime story, but this one should not appear on a children’s award list!”

I admit I was a bit apprehensive about reading the book as a result of Brandes and Ekstrand’s evaluation, but now that I have it doesn’t seem to me that it was as bad as they implied. Yes, some of the women are less than virtuous, but in contrast Philip Marsham himself is a model of honesty and loyalty. He didn’t come across to me generally as having “an eye towards comely women” but simply as a young man of nineteen smiling at “a comely lass” who caught his attention and whom he decided that he wanted to marry. A little bad language is found along with a lot of references to drinking alcohol, and I will grant that some of the murder descriptions are rather blunt, especially that of Will Canty. For that reason I would not recommend it for small or sensitive children, but after all it is a pirate story, and there is really nothing worse than what one would read in Treasure Island or a G. A. Henty novel. Charles Hawes’s first novel was The Mutineers written in 1920, though not published until 1925. He won a Newbery Honor Award in 1922 for The Great Quest, but then died shortly after the publication of The Dark Frigate, and his widow had to accept the Medal. If you are looking for a rousing seafaring adventure with bloody battles, brutal buccaneers, and a bold, spirited hero, The Dark Frigate will fill the bill.

This entry was posted in historical fiction, Newbery Award Winners. Bookmark the permalink.