Posted on April 25, 2013 by homeschoolbookreviewblog 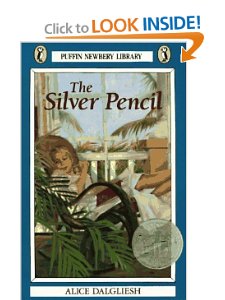 HOME SCHOOL BOOK REVIEW
Book: The Silver Pencil
Author: Alice Dalgliesh
Illustrator: Katherine Milhous
Publisher: Scholastic, republished in 1992
ISBN-13: 978-0590460101
ISBN-10: 0590460102
Language level: 2
(1=nothing objectionable; 2=common euphemisms and/or childish slang terms; 3=some cursing or profanity; 4=a lot of cursing or profanity; 5=obscenity and/or vulgarity)
Reading level: Ages 13 and up
Rating: **** 4 stars (GOOD)
Reviewed by Wayne S. Walker
Disclosure: Any books donated for review purposes are in turn donated to a library. No other compensation has been received for the reviews posted on Home School Book Review.
For more information e-mail homeschoolbookreview@gmail.com .

Dalgliesh, Alice. The Silver Pencil (published in 1944 by Puffin Books, an imprint of Penguin Books USA Inc., 375 Hudson St., New York City, NY 10014; republished in 1992 by Scholastic Inc., 730 Broadway, New York City, NY 10003). In the early 1900s, nine-year-old Janet Laidlaw lives in “the House on the Hill” on the West Indian island of Trinidad with her father, who owns a dry goods store, her mother, who is often ill, and their servants. Her brother Lawrence, who is ten years older, was away at school in Scotland when she was born and then went to sea, so she has never seen him, but he comes home to help in the family business. Janet learns stories of Scotland from her father, stories of England from her mother, and stories of America from reading Little Women. Seeing America is her ultimate dream. And she loves to write. That Christmas, Janet’s father gives her a silver pencil for her stories, and she writes about her life in Trinidad. However, shortly after that, Father unexpectedly dies.

The rest of the book follows Janet as she and her mother move to England for Janet’s schooling, through a visit with relatives in Scotland, then a return to Trinidad for mother’s health, to Janet’s decision to go to America for teacher training. All during these experiences, she continues to write with the silver pencil. But what will happen when she comes down with a serious illness? Will she ever achieve her goal of being a teacher? The book, which won a Newbery Honor Award in 1945, is somewhat semi-autobiographical. Alice Dalgliesh, who authored The Courage of Sarah Noble and The Bears on Hemlock Mountain, both of which also won Newbery Honor Awards, wrote, “This book is fiction and the characters are fictitious, with the exception of certain public figures and Professor Patty Smith Hill, whose name is used by permission. Many of the experiences of Janet Laidlaw are similar to my own; all the episodes in which children appear are true to life.” I generally liked The Silver Pencil, though it is not what I expected. It is an interesting story of one individual’s doing everything possible to accomplish a passionate aim, but the slow-moving plot with its lack of exciting action and adventure may not appeal to everyone.

There are a few common euphemisms (darned, gosh, gee), even one “Lord, no,” and once a parrot is said to have had “a red-hot collection of swear words,” though none are actually used. As she grows up, Janet experiences various romantic problems in her relationships with men, so some parents may not think the book appropriate for preteen girls, although there is nothing objectionable and teenage girls will undoubtedly like it. However, there are references to important historical events such as the eruptions of Soufrière and Mount Pelée, the coronation of George V of England, and the war on Germany (World War I). One “Kid’s Review” said, “What has possessed you people? How could you possibly rate this piece of trash 5 stars? This book has no plot. Everyone in my class read this book in literature class (not in one day, of course) and everyone HATED it! When we got a writing assignment about the book, almost nobody did well because you can’t even tell what the freakin’ book is about! Alice Dalgliesh is now hated by everyone in the 5th grade class in my school.” I simply responded, “One should be able to express the fact that he or she did not like a book without being abusive towards others. I’ll bet that some people might think that the books which this reviewer likes are pure trash.”