Posted on May 29, 2013 by homeschoolbookreviewblog 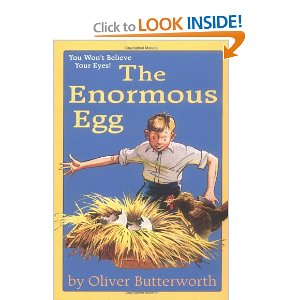 Butterworth, Oliver. The Enormous Egg (originally published in 1956 by Little, Brown and Company Inc., in association with The Atlantic Monthly Press, Boston, MA 02106; republished in 1986 by Dell Publishing, a division of The Bantam Doubleday Dell Publishing Group Inc., 666 Fifth Ave., New York City, NY 10103). Twelve-year-old Nathan (Nate) Twitchell lives on a small farm near Freedom, NH, with his father Walter who runs the local newspaper, the Freedom Sentinel, mother, and ten-year-old sister Cynthia. In the middle of June, one of their hens starts looking pretty queer and gets so big that she could hardly waddle. Later she lays the biggest egg that Nate had ever seen. It has a leathery shell and is as big as a mushmelon, measuring fifteen inches around and weighing three pounds and a quarter. What do you think finally hatches out of that egg one Sunday morning?

Well, it isn’t a chicken. It is a dinosaur called Triceratops. As luck would have it, Dr. Oscar Ziemer, a paleontologist with the National Museum in Washington, DC, just happens to be vacationing in the area, staying with the MacPhersons down at the nearby lake, and has heard about the egg, so he asks to be notified when it hatches. Nate names the dinosaur Uncle Beazley, after his mom’s great-uncle John Beazley. The Triceratops begins to eat and grow—and eat and grow—and eat and grow, until most of the available grass in the whole neighborhood is gone. What will the Twitchells do, especially when the weather gets too cold for a dinosaur? Dr. Ziemer suggests sending it to the National Museum in Washington. But with the change from the quiet country to the busy city, what will happen to Uncle Beazley?

I started liking this book as soon as I began reading it. Aside from a few common euphemisms (darn, gosh, golly, and gee), one use of the exclamation “My Lord,” and some references to tobacco use and a brand of whisky, the biggest objection that might be lodged against it is the evolutionary presuppositions undergirding the story. There are copious mentions of “millions of years ago.” While we creationists reject this hypothesized scenario, the vast majority of the world accepts it, and the book is fiction anyway, so with that understanding one can still enjoy the story. I did notice a couple of things about the book that I appreciated. Nate is told in no uncertain terms when he asks if they still have to go to church on the morning when the egg hatches that “there’s no reason to give up going to church just because we’ve got a dinosaur out back.” And the way Senator Granderson is pictured as wanting to get the federal government involved in nearly every aspect of our individual lives is certainly true to form.