Beyond the Summerland: The Binding of the Blade, Book 1

Posted on July 27, 2013 by homeschoolbookreviewblog 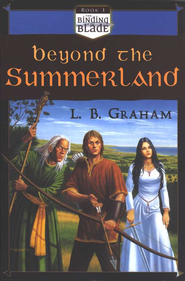 HOME SCHOOL BOOK REVIEW
Book: Beyond the Summerland: The Binding of the Blade, Book 1
Author: L. B. Graham
Illustrator: Larry Elmore
Publisher: P & R Press, 2004
ISBN-13: 978-0875527208
ISBN-10 0875527205
Related websites: http://www.bindingoftheblade.com (series), http://www.prpbooks.com (publisher)
Language level: 1
(1=nothing objectionable; 2=common euphemisms and/or childish slang terms; 3=some cursing or profanity; 4=a lot of cursing or profanity; 5=obscenity and/or vulgarity)
Reading level: Ages 12 and up
Rating: ***** 5 stars (EXCELLENT)
Reviewed by Wayne S. Walker
Disclosure: Any books donated for review purposes are in turn donated to a library. No other compensation has been received for the reviews posted on Home School Book Review.
For more information e-mail homeschoolbookreview@gmail.com .

Graham, L. B. Beyond the Summerland: The Binding of the Blade, Book 1 (published in 2004 by P & R Publishing Company, P. O. Box 817, Phillipsburg, NJ 08865). Twenty two year old Joraiem Andira lives with his father Monias, mother Elsora, seventeen year old sister Kyril, and twelve year old brother Brenim near the village of Dal Harat in Suthanin, one of the four regions of Kirthanin. Kirthanin had been created by Allfather and was originally ruled over by the twelve Titans, but one of them named Malek rebelled and fled to the Forbidden Isle. The Novaana are the noble families of Kirthanin who oppose him. Twice Malek has tried to conquer Kirthanin, and twice he has been repelled by the combined efforts of the Novaana, the Great Bear, and the dragons, and now he waits under the once holy mountain of Agia Muldonai with his Malekim or “Voiceless,” Black Wolves, and the Vulsutyrim giants, preparing for his third assault.

Joraiem’s family is of the Novaana, and the Assembly has decreed that every seven years all the Novaana between the ages of eighteen and twenty-five must go to Sulare, known as “the Summerland,” for training. There Joraiem meets Valzaan the blind prophet and the other young Novaana, including Aljeron from Werthanin who becomes his best friend, and Wylla Someris, princess of the region of Enthanin, with whom he falls in love. While in Sulare, they are attacked by Black Wolves and see a sign in the sky which indicated that Malek had returned to the Forbidden Isle, possibly to get ready to make his next move. So they go with Valzaan to the Forbidden Isle where they are again beset by Malekim, Black Wolves, and a Vulsutyrim. The women are captured, and the men are stranded. What will happen to them? Will they ever get home? Will Joreiam and Willa be able to get married?

I first heard about this book back in 2004 after it was first published. Then I had the opportunity earlier this year to meet the author, Lowell B. Graham, at a homeschool conference. The story is told well with a good balance of action and reflection, and it had no trouble keeping my interest up. Fantasy lovers should enjoy it, and while there are minor references to drinking ale, smoking a pipe, and dancing at a wedding festival, Graham’s Christian worldview also shines through so no bad language or other objectionable elements are found. Some people may not care for the surprising nature of the rather abrupt ending. In fact, some people may not care for the ending at all, but then, he who writes the fantasy fiction gets to choose how it concludes. Bad things do happen to people. And it is really not the end, but, as book one in a five-book series, it is a cliff-hanger that prepares for the sequels which carry the story forward: Bringer of Storms: The Binding of the Blade Series #2; Shadow in the Deep: Binding of the Blade Series #3; Father of Dragons: Binding of the Blade Series #4; and All My Holy Mountain: Binding of the Blade Series #5.