Posted on September 26, 2013 by homeschoolbookreviewblog 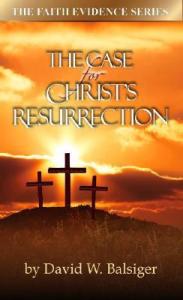 Balsiger, David W., and Minor, Michael. The Case for Christ’s Resurrection: Most Comprehensive Evidence Ever Compiled on Christ’s Resurrection (published in 2997 by Bridge-Logos, Orlando, FL 32822). I bought this book hoping to read some of the latest material about solid evidences for the resurrection of Christ in helping to prepare a new series of lessons on apologetics. It is not what it seems to be. After a couple of general chapters about Christ’s resurrection, much of which simply cites and summarizes the writings of Lee Strobel, the rest of the book argues that the “one piece of physical proof—evidence that has outlasted time and all the elements for a period of centuries—that is offered to validate the Resurrection” is the Shroud of Turin. Even though the authors say, “The chapters that follow will enable us to examine the variety of historical, archaeological, medical and scientific evidences as we build The Case for Christ’s Resurrection,” they then admit, “Discovering whether the image on the Shroud is fact or fable is the purpose of this book.” I thought that it was interesting that the book was dedicated to Monsignor Giuseppe Ghibhert, who is obviously a Roman Catholic official. The Roman Catholic Church has a history of dubious relics, such as claiming to have enough “splinters of the Cross” in different places to make literally dozens of entire crosses.

Some pretty wild-sounding claims are also made for the Shroud. “The cloth may be able to show us some elemental facts about matter that could change the way scientists analyze the universe….Some scientists now believe the imprint on this ancient physical artifact uniquely identifies not only the artifact itself, but events surrounding the history of that artifact. The particle physicist studying the ancient piece of cloth concludes that it leads us to a mysterious gateway that opens to a completely different world, ‘an extraordinary world with extraordinary laws.’” I firmly believe in the resurrection of Christ, but this sounds more like science fiction to me. The authors plead, “Approach the facts in this book with an open mind, seeking Truth. Test the evidence and see if it holds up to the scrutiny of scientific and logical investigation.” The problem for most of us in trying to “test the evidence” is that while there are some scientists who put forth these claims, there are other scientists, equally qualified in their fields and equally strong in their faith, who say that there are no real “facts” here, just pure conjecture (or hokum to put it less kindly).

In spite of these claims for the Shroud, the authors admit that many “accept it as authentic on faith alone” (i.e., without any real evidence) and that “an explanation that everyone can agree upon has eluded even the most ardent investigators.” David W. Balsiger is a television producer/director who is co-partner in Grizzly Adams Productions, Inc. The Case for Christ’s Resurrection is the companion book to Balsinger’s TV documentaries The Case for Christ’s Resurrection which premiered on TBN and Fabric of Time: Secrets of the Universe. The DVD version of this book, which contains extended interviews and additional historic holographic footage not included in the TV documentary, is also available, and the two can be purchased as a set. However, I must warn you, it is NOT The Case for the Resurrection of Jesus by Gary R. Habermas and Michael Licona published by Kregel Publications in 2004, or The Case for the Resurrection: A First-Century Investigative Reporter Probes History’s Pivotal Event by Lee Strobel published by Zondervan in 2010. Based upon their authorship, I could probably recommend those two books, but I really can’t recommend The Case for Christ’s Resurrection unless one is just interested in reading about the Shroud of Turin—and even then, take it with a grain of salt.

This entry was posted in apologetics. Bookmark the permalink.