Homesick: My Own Story

Posted on November 15, 2013 by homeschoolbookreviewblog 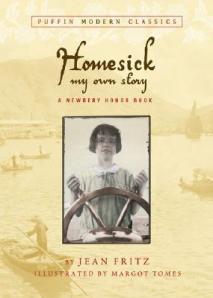 Fritz, Jean. Homesick: My Own Story (published in 1982 by G. P. Putnam’s Sons, New York City, NY; republished in 1987 by Yearling, an imprint of Dell Publishing, a division of The Bantam Doubleday Dell Publishing Group Inc., 666 Fifth Ave., New York City, NY 10103). Jean Guttery Fritz is the author of over fifty books for children, including such excellent historical fiction as Early Thunder, The Cabin Faced West, and Brady, and biographies like The Double Life of Pocahontas; Why Not, Lafayette?; George Washington’s Breakfast; And Then What Happened, Paul Revere?; Where Was Patrick Henry on the 29th of May?; Will You Sign Here, John Hancock?; The Great Little Madison; Traitor: The Case of Benedict Arnold; Harriet Beecher Stow and the Beecher Preachers; and Just A Few Words, Mr. Lincoln. Homesick, which was a Newbery Honor winning book in 1983 and also won the American Book Award, is her own life’s story, or at least two years of it, from October, 1925, when she was nine, almost ten, having been born in Hangkow, China to American missionary parents, until September, 1927, when she and her parents had left China and returned to their family’s home in Washington, PA. She says, “Strictly speaking, I have to call this book fiction, but it does not feel like fiction to me. It is my own story, told as truly as I can tell it.”

Referred to thus as a “fictionalized autobiography,” it is the captivating, heartwarming story of a little girl growing up in an unfamiliar place who, instead of enjoying her childhood in America, was living in China during a difficult period of political unrest. Fritz takes readers back to her home on the Yangtze River in the days of the 1927 Chinese Revolution and, blending humor with simple, candid honesty, writes about being called a “foreign devil,” the death of a newborn sibling, and the general aches and pains of growing up. Some might complain that she comes across as a somewhat irritatingly spoiled, whiny complainer, but it is more the sassiness that is so typical of pre-teen girls, and everything works out in the end. In addition, there is a great deal of information about early twentieth century Chinese culture and history, so it would be a good complement to a study of that era and place. There are a few references to smoking cigarettes but otherwise nothing objectionable. Also, it is interesting to note that when the British School in Hangkow which Jean attended closed because of the war, her mother told her, “We’ll have lessons together.” So she was homeschooled for a time. All in all, it is a fine story.

This entry was posted in biography, Newbery Honor Books. Bookmark the permalink.