Posted on November 24, 2013 by homeschoolbookreviewblog 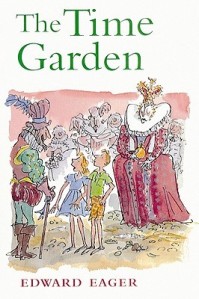 Eager, Edward. The Time Garden (originally published in 1958, and republished in 1999 by Harcourt Brace and Company, 6277 Sea Harbor Dr., Orlando, FL 32887). In another one of Edward Eager’s Tales of Magic, the irrepressible children from Knight’s Castle return for some further magic adventures. The father of Roger and Ann, who live in Toledo, OH, has written a play that is to be produced in London, England. He and their mother must go there The brother and sister are to stay with their cousins in Baltimore, MD, Jack and Eliza, again, but Aunt Katharine and Uncle John are planning a business trip to England too, so the four cousins are sent to spend the summer with a distant great-aunt, old Mrs. Whiton who lives outside of Boston, MA, beside the sea. There they discover a special thyme garden overseen by a magical toad-like creature known as the Natterjack.

The children learn that if they rub some of the thyme, they are magically transported to different times and places. They have experiences with Whiton ancestors in the Revolutionary War, abolitionist ancestors on the Underground Railroad in pre-Civil War days, the March/Alcott family of Little Women fame who lived nearby, and cannibals on a tropical island. At first, Jack doesn’t want to “play.” He’s too interested in girls and claims that it’s all just pretend anyway, but he finally joins in. Things never seem to go as desired, yet they always work out in the end. Then they want to go see their parents in London and visit the Queen. However, something goes horribly wrong. What will they do when Jack and Eliza get stuck with Queen Elizabeth I, and Eliza is imprisoned at the Tower of London, while Roger and Ann end up talking with Queen Victoria?

I like Edward Eager’s stories. They are quite reminiscent of the tales by Edith Nesbit who was one of C. S. Lewis’s favorite storytellers. Some people oppose any kind of “magic” in children’s books, so they would want to avoid ones like this. However, from my perspective, the “magic” of Eager is not the occultic magic of witchcraft and sorcery but the make-believe magic of fairy tales. There are a couple of common euphemisms (gee and darn) but no truly bad language like cursing or profanity. It is interesting to note that the mothers of the two sets of cousins were two of the children in Half Magic and Magic by the Lake, also by Eager. Very easy to read and light-hearted with clever chapter titles, the book is both fun and funny and may actually stimulate some interest in the historical periods and events which the children visit.