Posted on February 22, 2014 by homeschoolbookreviewblog 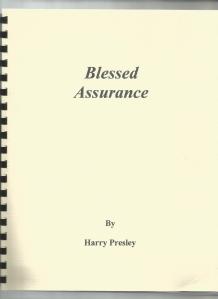 Presley, Harry. Blessed Assurance (published in 2010 by Rick Ritter). Harry Presley, born Nov. 27, 1924, near Stilwell, OK, in the home of his parents John M. and Inez Richardson Presley, grew up in the Stilwell area, received his schooling from the Stilwell public schools, and graduated from high school in 1942. Following his baptism into Christ on Sept. 17, 1950, he served in the U. S. Army in Korea during the Korean War. After his return, he began preaching the gospel in 1956, doing fill-in work for local congregations. On Dec. 17, 1961, he started preaching full-time for the Four Corners church of Christ, five miles east of Stilwell on Hwy. 100. Presley continued his full-time preaching work until Dec. 31, 1986, when health problems forced him to retire, but he has continued to be an active member of the Four Corners congregation, teaching the adult Bible class and leading singing. In addition, he has written three commentaries on books of the Bible: Zechariah, Revelation, and Romans; and has produced over 1,000 poems. Through the years, much of his poetry has been published in the Gospel Light out of Delight, AR. Ninety of his poems were published by Leon Brashear, former preacher at Four Corners, in a book entitled Treasures of the Heart in 1988. Rick Ritter, current preacher at Four Corners, published 105 of Presley’s poems in 2010 in a book entitled Blessed Assurance. Harry sent me a copy of the latter. It is available through the website of the Braggs, OK, church of Christ where Brashear now preaches. Some of Presley’s poems have also been published as hymns. Those who like devotional religious poetry should enjoy this book, which is plastic-comb spiral bound.