The Light and the Glory

Posted on March 24, 2014 by homeschoolbookreviewblog 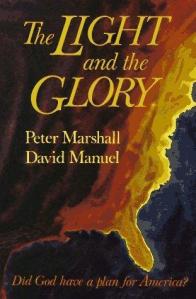 Marshall, Peter J. Jr., and Manuel, David B. Jr. The Light and the Glory (published in 1977 by Fleming H. Revell, a division of Baker Book House Company, P. O. Box 6287, Grand Rapids, MI 49516). From the discovery of the New World by Christopher (literally, “Christ bearer”) Columbus in 1492, through the time of the Spanish and French explorers with their missionaries, the English colonization of the eastern seaboard, centering on Jamestown, Plymouth, and Boston, and the American patriots’ war for independence, down to the beginning of the United States’ republic and George Washington’s presidency, authors Peter Marshall and David Manuel, both of whom have now passed on, present a distinctly Christian view of American history, often referred to as “Providential History.” It is fascinating reading, because rather than a mere recitation of people, places, events, and dates, the method in which history is usually given in dry, dusty school textbooks, the narrative is told in story form. Certainly not everyone, and not even all Bible believers, accept the idea of “Providential History,” but it is pretty clear that many, and perhaps most, of our forefathers who contributed to the founding of this nation did. I’m not sure that I myself necessarily concur with all the claims made by those who promote “Providential History,” but it is a view of history that deserves careful consideration by Christians, and everyone else for that matter.

We used this book, with its two sequels, as additional resources in our study of American history. When I first considered them, I asked a gospel preacher friend of mine who operated a bookstore and also was a homeschooling father, if he knew anything about them, and he said, “They’re charismatic.” I don’t know what Marshall’s and Manuel’s personal religious beliefs were, but it is plain that they believed that the Holy Spirit directly gave them insight in some of the conclusions which they reached, and that God supernaturally and even miraculously guided many of those who had a hand in the discovery, settlement, and founding of America. It also appears that they thought that the modern Pentecostal-Charismatic movement is an outpouring of the Holy Spirit in fulfillment of Acts 2:17-18. In addition, some typical evangelical Protestant doctrines, such as salvation by faith alone and a fallen nature due to inherited depravity, are found. However, putting purely theological disagreements aside and considering only their recitation of history, there are some interesting ideas. For example, pp. 214-215 has a good analysis of how the New England Puritans went from trusting completely in God to relying solely on themselves and how that possibly led to some of the problems which they later experienced. The authors do not overlook or omit the personal and corporate failings of the people and groups whom they discuss.

Of course, any attempt to trace God’s hand in history is fraught with some degree of subjectivity. In a review entitled “Thirty Years of Light and Glory,” John Fea, an American history professor at Messiah College in Grantham, PA, wrote, “Can a Christian claim to know God’s purposes in history in the way that Marshall and Manuel suggest he can? I remain skeptical. If God’s rule extends over all of history, and his providence subsumes all events, then how can we say that some events—such as those that led to the development of the United States—are more providential than others?… Thirty-one years after its original publication, The Light and the Glory maintains a prominent place on the bookshelves of Evangelical Christians. But it must be read with caution. Perhaps Ambrose Bierce best described Marshall and Manuel’s approach when, in his Devil’s Dictionary, he defined providence as an idea that is ‘unexpectedly and consciously beneficial to the person so describing it.’” The warning is well taken. However again, though I may not fully concur with everything taught as “Providential History,” I am unwilling to dismiss the idea out of hand. To be fair, Marshall and Manuel say in their introduction, “How many of the incredible blessings which have been poured out upon this land—how much of the grace which continues to cover this country—were a direct result of their obedience and willingness to die to self, only God knows for certain.” The fact is that mainstream texts treat American history as if God did not exist, whereas Marshall and Manuel offer a narrative of early American history focused on the sovereignty of God. Therefore, they offer a perspective that the student may not get elsewhere. One may not necessarily agree with their views that the United States was founded as a “Christian nation” or that God deals with America as He did with ancient Israel, but is there anyone who can successfully deny that God may well have had a purpose in the founding of this nation and a hand in the events that brought it about? That is the question.