Posted on April 15, 2014 by homeschoolbookreviewblog 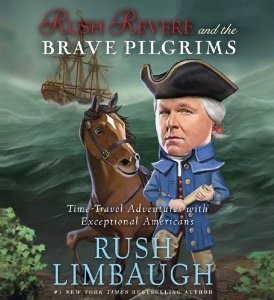 Limbaugh, Rush. Rush Revere and the Brave Pilgrims: Time-Travel Adventures with Exceptional Americans (published in 2013 by Threshold Editions, a division of Simon and Schuster, 1230 Avenue of the Americas, New York City, NY 10020). Rush Revere is a young history teacher who is subbing at Manchester Middle School and has a unique way of presenting history using a horse named Liberty who can talk and also travel back in time. Rush and Liberty, along with a couple of students, a boy named Tommy and a girl named Freedom, go back to the time of the Pilgrims while Rush records everything on his cell phone camera and broadcasts it back to the class. Beware—the left HATES this book. It makes them so mad they can’t see straight. I read through a lot of the hate reviews where people kept calling it propaganda. Well, isn’t that the pot calling the kettle black? Everything that “progressives” write is nothing but pure propaganda for their opposition to American exceptionalism. You could just feel all the love and tolerance which the left so loudly promotes just oozing out of those reviews (hint: I’m being very sarcastic). For example, someone wrote, “A talking horse–how Christian is that?” One objecting person said, “Teaching our kids about ALL history is a must!” What this usually means is presenting a “warts and all” approach. Yes, America isn’t perfect and there may be a time and place for learning that, but not necessarily for young children. They need to see first what is good, noble, and true in our nation’s history.

So many of these reviewers talked about all the historical inaccuracies in the book, but practically all of these supposed inaccuracies mentioned were the result of either misunderstandings or the fact that Rush’s conclusions don’t match with the left’s “anti-dead, white, European male,” blame America first philosophy. It’s as if these left-wingers received their marching orders, and maybe even promised some pay, to go write negative reviews whether they had actually read the book or not. Here are some examples. “Also downplayed, the pilgrims would have died if it hadn’t been for the Native Americans teaching from how to farm. It seems to me that diversity and collaboration is what saved the colony from being another failure.” Of course, “diversity” is a buzzword that can mean about anything people want, but this charge is patently false because Rush plainly mentions the help which Samoset, Squanto, and Massasoit gave the Pilgrims, and even specifically includes Squanto among the “exceptional people…who left such as mark on American history.” One person objected to Rush Revere’s Revolutionary era dress when going back to the time of the Pilgrims. Anyone who had really read the first chapter would know why (hint: it has something to do with his name).

Regarding the claim that the message of the book is that “Socialism failed,” another said, “We must forget the fact that socialism, as a political concept, wasn’t developed until about 200 years after the voyage of the mayflower. That would be putting facts in the way of history.” That’s like saying that since the word “dinosaur” wasn’t invented until 1841 by Richard Owen there couldn’t have been any dinosaurs before that. Socialistic ideas have existed for thousands of years. In fact, another critical review admitted, “Communal ownership was a failure, and that is made very clear. What is not made clear is that communal ownership was imposed on the pilgrims by their investors.” That was a form of socialism! Yet another complaint. “In the author’s note, Limbaugh goes on about how the United States is exceptional because of a founding principal that every person is free. He cannot, therefore, admit that slavery happened here…For parents who gave his book starred review, did you discuss that omission with your children?” Wait a minute! We’re talking about the Pilgrims here; they didn’t have any slaves. Finally, someone said, “The writer tries too hard to be ‘hip’ with kids throughout especially with all the puking. Not sure who’s paying all these folks to write good reviews.” Well, the book is intended to draw young people in to learning about history and so is written in a way to appeal to that age group. I would probably have done it differently, but anyone who could promote Harry Potter or the Wimpy Kid books should have no problem with the “hipness” of Rush Revere. In short, I liked it. Yes, there are some inside jokes about Limbaugh’s tea company, but come off your high horse, lighten up a little, and enjoy the ride.

3 Responses to Rush Revere and the Brave Pilgrims: Time-Travel Adventures with Exceptional Americans