Posted on April 23, 2014 by homeschoolbookreviewblog 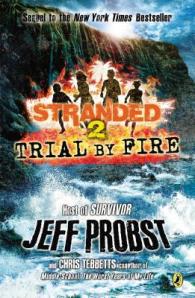 Probst, Jeff, and Tebbetts, Chris. Trial by Fire: Stranded Book 2 (published in 2013 by Puffin Books, an imprint of Penguin Young Readers Group, 345 Hudson St., New York City, NY, a division of Penguin Books). This book is a sequel to the New York Times bestseller Stranded: Book 1 by Jeff Probst, the multi-Emmy Award winning host of Survivor. In Stranded, Vanessa Diaz, age thirteen, her brother Benjamin or “Buzz,” eleven, and their step-brother and sister, Carter, also eleven, and Jane Benson, nine, were shipwrecked on a jungle island, which they begin calling “Nowhere Island,” in the middle of the South Pacific following a terrible storm in which their uncle and his first mate were swept away while trying to inflate the life raft. Now they lose their boat and almost everything on board in another violent storm. They need food and shelter, but most important, they need fire to cook their food and light a signal which they have built on a rocky cliff accessible only by a fallen log for a bridge for any rescue planes or ships that might come looking for them.

After the four have to deal with the wild boars that roam the island, the crude hut that they build is accidentally destroyed by Vanessa. When she wanders off, the others hear a plane and rush up to the cliff to see if they can light the signal fire, but the log bridge falls into the 200-foot chasm below just as they get across and they are stuck on the cliff. Meanwhile, Vanessa discovers a terrible and startling secret about Nowhere Island. What is it? Will the plane spot them? How can the others find a way to get down off the cliff? And what will happen to them all? There is another sequel, Survivors: Stranded Book 3. The euphemistic “gee” and the ubiquitous “omigosh” each appear once. Like its predecessor, Trial By Fire is a high interest, low effort story, but it does have some useful lessons, such as helping young people to realize that as they get older, things are not always so nice and “happily ever after,” and showing them the importance of finding out how to get along with one another.

This entry was posted in adventure. Bookmark the permalink.