Posted on May 10, 2014 by homeschoolbookreviewblog 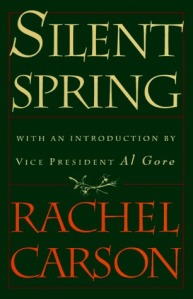 Carson, Rachel. Silent Spring (originally published in 1962 and republished in 1994 by Houghton Mifflin Company, 215 Park Ave. S., New York City, NY 10003). For Christians, the Bible is the Holy Book from God. To Muslims, the Koran is their sacred text. Hindus have the Veddas, and Buddhists the Tripatika. The similar volume for Environmentalism, which is a religion for some, is undoubtedly Rachel Carson’s Silent Spring, first published in three serialized excerpts in the New Yorker in June of 1962, with the book appearing in September of that year. I never would have had any motivation to read this book except that our younger son Jeremy signed up for an online course in Advanced Biology for which it was required reading. He eventually dropped the course for technological reasons, but since we had already bought the book, I decided to go ahead and read it. I am certainly not qualified to judge the accuracy of the “scientific” evidence which the author set forth, so I must rely upon what others more knowledgeable have said. From a positive standpoint, I will say that Carson was a good writer who certainly sounded a much-needed warning against the abusive, indiscriminate, excessive misuse of pesticides. The book begins with a “fable for tomorrow” about a “silent spring” where all the birds are gone, the fish are dead, the people are ill, the vegetation is withered, and there is a white, granular powder that covers everything. Yet, Carson admits, “I know of no community that has experienced all the misfortunes I describe.” But she then launched into a polemic arguing that “This pollution is for the most part irrecoverable,” filled with “no one knows,” “yet little known,” ‘may be,” “could,” “believes,” “suppose,” “largely conjectural,” “probably,” “appears,” and other weasel terms, and many of the dire, doleful, doomsday predictions suggested with these terms have not proven to be true.

It is clear that Carson’s world-view is an organic evolutionary one as she quotes Charles Darwin frequently, relies heavily on his theory of survival of the fittest, and talks about “millions of years.” To be fair, she does write, “All this is not to say there is no insect problem and no need of control….It is not my contention that chemical insecticides must never be used.” But the mass hype and hysteria that followed the release of her book ended up with the practical result of banning most pesticides, especially the ones that really worked. Several criticisms have been laid against Carson’s work. The book had no peer review and gave only anecdotal evidence. In claiming that there was a dramatic increase in the rate of death from childhood leukemia between 1900 and 1960 and blaming the increase on chemical pollution, she failed to understand the difference between rate and incidence. A number of people have noted that the ban on DDT has resulted in the deaths of forty million people, mostly children, from malaria over the last forty years, especially in Africa. In fact, in 2006, the World Healthcare Organization (WHO) changed its policy and recommended that DDT should be sprayed indoors–yes indoors–to help prevent the growing resurgence of malaria. Entomologist G. Gordon Edwards wrote, “In 1962, Rachel Carson published Silent Spring, and because of my 25 years of nature study I expected to be delighted….It didn’t take long to learn that she had filled the book with great numbers of untruthful things.”

Rachel Carson dedicated her book to Albert Schweitzer, who said “Man has lost the capacity to foresee and to forestall. He will end by destroying the earth.” Of course, he was referring to atomic warfare, not chemical pesticides as implied. Schweitzer’s autobiography does mention DDT. He wrote, “How much labor and waste of time these wicked insects do cause us…but a ray of hope, in the use of DDT, is now held out to us.” Author Michael Crichton, not known to be a conservative, said, “DDT is not a carcinogen and did not cause birds to die and should never have been banned. I can tell you that the people who banned it knew that it wasn’t carcinogenic and banned it anyway. I can tell you that the DDT ban has caused the deaths of tens of millions of poor people, mostly children, whose deaths are directly attributable to a callous, technologically advanced western society that promoted the new cause of environmentalism by pushing a fantasy about a pesticide, and thus irrevocably harmed the third world.” Again, to be fair, Carson doesn’t necessarily deserve all the blame. That belongs to the politicians who exploited the issue. If you are interested in reading the other side of the story for a balanced view of the subject, there is Silent Spring at 50: The False Crises of Rachel Carson by Andrew Morriss, Roger Meiners, and Pierre Desroches, which argues, “The conclusion makes it abundantly clear that the legacy of Silent Spring is highly problematic. While the book provided some clear benefits, a number of Carson’s major arguments rested on what can only be described as deliberate ignorance. Despite her reputation as a careful writer widely praised for building her arguments on science and facts, Carson’s best-seller contained significant errors and sins of omission. Much of what was presented as certainty then was slanted, and today we know much of it is simply wrong.”