Posted on June 28, 2014 by homeschoolbookreviewblog 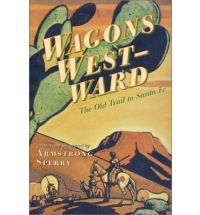 HOME SCHOOL BOOK REVIEW
Book: Wagons Westward: The Old Trail to Santa Fe
Author and Illustrator: Armstrong Sperry
Publisher: David R Godine, republished in 2000
ISBN-13: 978-1567921281
ISBN-10: 1567921280
Related website: http://www.godine.com (publisher)
Language level: 3
(1=nothing objectionable; 2=common euphemisms and/or childish slang terms; 3=some cursing or profanity; 4=a lot of cursing or profanity; 5=obscenity and/or vulgarity)
Reading level: Ages 12 and up
Rating: **** 4 stars (GOOD)
Reviewed by Wayne S. Walker
Disclosure: Many publishers and/or authors provide copies of their books in exchange for an honest review without requiring a positive opinion. Any books donated to Home School Book Review for review purposes are in turn donated to a library. No other compensation has been received for the reviews posted on Home School Book Review.
For more information e-mail homeschoolbookreview@gmail.com .

Sperry, Armstrong. Wagons Westward: The Old Trail to Santa Fe (published in 1936 by the John C. Winston Company; republished in 2000 by David R. Godine Publisher Inc., P. O. Box 450, Jeffrey, NH 03452). It is 1846, on the eve of the war between the United States and Mexico. Fifteen year old Jonathan (Johnny) Starbuck lives with his father in Independence, MO, and watches all the wagon trains heading west, to either Santa Fe or Oregon, wishing he could go with them. His grandfather had moved the family from Virginia west to Kentucky. His father had continued on through Indiana to Illinois. Then after Johnny’s mother died, they had come to Independence where his father was crippled in an accident with a falling tree. Johnny hates his work as an apprentice to a mean Mexican saddle maker named Sabino Roybal, but someone has to provide for their needs. Therefore, after his father’s death, he jumps at the chance to go with scout Pierre Leroux who is leading a wagon train captained by Independence trader Black Jack Bannock to Santa Fe.

However, Johnny hears snatches of conversations by Bannock, a shady character at best, first with Roybal in Independence and then with Bannock’s cook Jake Bailey on the trail, which lead him to believe that there is more to this trip than a mere trading expedition. Something nefarious is going on. What is it? Can he trust Leroux? Will they be attacked by Indians? Can they make it across the burning desert? Author Armstrong Sperry won the Newbery Award in 1941 for his novel of the South Pacific, Call It Courage, which is one of my all-time favorite books. In Wagons Westward he tackles the old American West. It will really give one a sense of what a journey along the Santa Fe Trail in 1846 must have been like. I must issue one warning. This is not a quiet, tame book. There is some rough language. In addition to a number of colloquial euphemisms, the “d” and “h” words appear occasionally, and various forms of the terms “God” and “Lord” are used as interjections.

Also, references to smoking tobacco, drinking alcohol, and even getting drunk occur. Furthermore, the story is intended to be a very realistic account based on solid research, so while I would not call the violence gratuitous, it does contain somewhat detailed descriptions of shootings, killings, scalpings, and massacres that might not be appropriate for small children, sensitive readers, or squeamish stomachs. And the politically correct will not like the way Native Americans are portrayed. However, it is a historically accurate picture of what actually happened and of the kinds of attitudes towards Indians which prevailed at the time, so it would make a good literary complement to a study of that period. And it has a brief glossary of terms. The plot is filled with adventure and excitement, and I think that it is a good book. Pre-teens and young adults, especially boys, who like bang-bang, shoot-‘em-up, cowboy and Indian stories should enjoy it.