He Heard America Sing: The Story of Stephen Foster

Posted on July 19, 2014 by homeschoolbookreviewblog 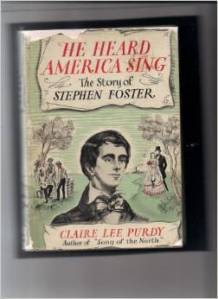 Purdy, Claire Lee. He Heard America Sing: The Story of Stephen Foster (published in 1940 by Julian Messner Inc., 8 W. 40th St., New York City, NY). I majored in music at the University of Akron and have continued to be a student of music history and literature ever since. While the United States was developing a fairly good group of serious composers during the 1800s, the most truly original voice in American music of the nineteenth century was Stephen Collins Foster (July 4, 1826 – January 13, 1864), an American songwriter primarily known for his parlor and minstrel music, and sometimes called the “father of American music.” Even those who know almost nothing about music instantly recognize such famous melodies as “Oh! Susanna,” “Old Folks at Home” beginning “Way down upon the Swanee River,” and especially “My Old Kentucky Home.” Born and raised near Pittsburgh, PA, Foster was schooled at home and attended private academies. For a while, he became a bookkeeper with his brother’s steamship company in Cincinnati, OH, where he penned his first successful songs.

Returning to Pennsylvania, Foster signed a contract with the Christy Minstrels and attempted to earn a living as a professional songwriter but made very little money. After he moved to New York City in 1860, poverty and estrangement from his wife led to depression and heavy drinking which in turn led to his death at the age of 37. This juvenile biography of the song writer is an example of the kind of living books that were written for school children back in the days when the purpose of schools was actually to educate. A few common euphemisms occur, and there are some references to dancing. While the book is a sympathetic portrait, the author does not simply gloss over Foster’s personal failings. Of course, mention is made of his drinking. However, it is not sensationalized but treated very tastefully and shows the consequences of making bad choices.

Even though my copy, which I picked up at a used book sale, is a library discard and is marked with the Dewey Decimal System listing of 921, which is biography, it is not strictly a mere historical account. The Introduction says of the author, “She has made use of known facts and traditions in the lives of Stephen Foster and his family; to heighten dramatic interest she has made use of fiction in describing incidents forming the background for her facts; these episodes are interwoven with contemporary American history.” Someone wrote, “Messner Biographies are important first, because they include historical figures not addressed by other popular out-of-print series, and second, because they contracted with some excellent children’s authors!” Claire Lee Purdy also wrote biographies for young people about Mozart, Dvorak, Gilbert and Sullivan, Tchaikovsky, Victor Herbert, and Edvard Grieg. They make interesting reading for anyone but would be especially beneficial for music students.