A Peep Behind the Scenes

Posted on July 28, 2014 by homeschoolbookreviewblog 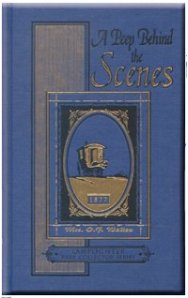 HOME SCHOOL BOOK REVIEW
Book: A Peep Behind the Scenes
Author: Mrs. O. F. (Amy Catherine) Walton
Cover llustrator: Jennifer L. Hamby
Publisher: Lamplighter Publishing, republished in 1997
ISBN-13: 978-1584740032
ISBN-10: 1584740035
Related website: http://www.lamplighterpublishing.com (publisher)
Language level: 1
(1=nothing objectionable; 2=common euphemisms and/or childish slang terms; 3=some cursing or profanity; 4=a lot of cursing or profanity; 5=obscenity and/or vulgarity)
Reading level: Suitable for all ages
Rating: ***** 5 s tars (EXCELLENT)
Reviewed by Wayne S. Walker
Disclosure: Many publishers and/or authors provide copies of their books in exchange for an honest review without requiring a positive opinion. Any books donated to Home School Book Review for review purposes are in turn donated to a library. No other compensation has been received for the reviews posted on Home School Book Review.
For more information e-mail homeschoolbookreview@gmail.com .

Walton, Mrs. O. F. (Amy Catherine). A Peep Behind the Scenes (originally published in 1877 by the Religious Tract Society; republished in 1997 by Lamplighter Publishing, a division of Cornerstone Family Ministries Inc., P. O. Box 777, Waverly, PA 18471). Twelve year Rosalie Joyce lives with her father Augustus and mother Norah, but they have no fixed abode. They are actors who travel from fair to fair in a caravan. Augustus is a cruel man who drinks and carouses. Norah ran away from home to marry him and lost all contact with her family, but she is now very ill. While at a fair in one town, a gentle old man gives the girl a picture of a Shepherd who loves and cares for her, so she and her mother begin reading about the Shepherd in the Bible, and Norah says that if something ever happens to her, Rosalie is to find her sister, Lucy Leslie, who married a minister.

A short time later Norah dies, and Augustus eventually remarries. Rosalie’s step-mother is also very cruel. Soon, the father is killed in an accident and his new wife plans to send Rosalie to an orphan home, so Rosalie sets off to find her aunt. Along the way several people help her and she in turn helps several others. But will she ever locate her aunt’s home? And how will she find the way? Mrs. O. F. Walton was born Amy Catherine Deck, the daughter of a minister. She married Octavius Frank Walton, who was also a minister, and became a British author of Christian children’s books. Her career began with My Mates And I, written in 1870 but not published until 1873. Her first published work was My Little Corner in 1872. In 1877, A Peep Behind The Scenes was published. Although she wrote many more books, it is A Peep Behind the Scenes and Christie’s Old Organ that have remained well known.

The basic premise of this tender story is that all that glitters is not gold. From Rosalie’s “peep behind the scenes,” she learns, and the reader will also learn, that we must not trust outward appearances, that there is no real joy in anything of this world, and that the only way of true happiness is found in keeping near the Good Shepherd. There are, of course, general references to Augustus’s drinking and carousing and one mention of a character fetching his pipe and tobacco, but there is no explicit detail. Not everyone will agree with how the way to be saved is explained, but the major emphasis is simply upon trusting in Christ for forgiveness and then striving to follow His word in everything one does. That is certainly refreshing. A Peep Behind the Scenes outsold The Scarlet Letter by over two million copies in the 1800s. I have also previously read and reviewed Christie’s Old Organ and its sequel, Christie, the King’s Servant.

This entry was posted in period fiction. Bookmark the permalink.