Marvel’s Guardians of the Galaxy: The Junior Novel

Posted on October 7, 2014 by homeschoolbookreviewblog 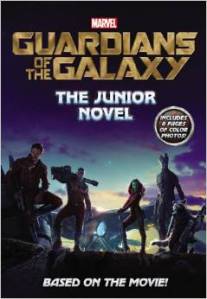 Book: Marvel’s Guardians of the Galaxy: The Junior Novel

Wyatt, Chris.  Marvel’s Guardians of the Galaxy: The Junior Novel (published in 2014 by Little Brown and Company, a division of the Hachette Book Group Inc., 237 Park Ave., New York City, NY  10017).  Marvel has a comic book series entitled “Guardians of the Galaxy” by Dan Abnett and Andy Lanning.  In 2014 an American superhero film based on the series with a screenplay written by James Gunn and Nicole Perlman was released by Walt Disney Studios.  This book is the junior novelization of the movie written by Chris Wyatt.  The Prologue tells how in 1988 nine-year-old Peter Quill was abducted from Earth by the Ravagers, a group of space pirates led by Yondu Udonta, following his mother’s death.  As chapter 1 opens some twenty plus years later, Peter is on the planet Morag to steal a mysterious orb for the Broker but is intercepted by Korath, a dangerous commander in the army of the warlord Ronan the Accuser.  Peter escapes with the orb, but Yondu discovers his theft and issues a bounty for his capture, while Ronan sends an assassin Gamora after the orb.

Peter attempts to sell the orb on Xandar.   Gamora ambushes him, but a couple of bounty hunters, the genetically engineered raccoon Rocket, and the tree-like humanoid Groot, interfere. The Nova Corps police arrive and arrest all four, imprisoning them on Kyln, where they meet a powerful inmate named Drax the Destroyer.  The five work together to escape from Kyln and flee to Knowhere, a remote criminal outpost where they are to sell the orb to the collector Taneleer Tivan.  However, with Ronan, Yondu, and the Nova Corps all after them, will they make it?  Can they trust anyone—even each other?  And what will happen with the orb?  I did not see the film, but those who have say that the book covers only one half to two thirds of the movie.  This may be due to the possibility that the book was perhaps published before the motion picture was released to build suspense but not give away the big conclusion.  I picked up the novel in Walmart because it sounded interesting and I wanted to see what the plot was like.

Nothing overtly immoral or ungodly appears, and there is no bad language.  In one scene, Peter and Gamora dance.  The pace moves along very quickly, boom—boom—boom, seemingly intended for ten-year-olds with the attention span of five-year-olds.  Of course, a movie can depict a lot in a short span which it may take a book several paragraphs to describe.  It might be beneficial for struggling or reluctant readers, but one reviewer noted, “This book does not have any strong story fundamentals – plot, character development, story arc….If you have an on-level reader beyond third grade, this is not the book to push them.”  As you may imagine, a lot of fighting and even some killing occur, but at least in the novel it is not gruesomely detailed.  Concerning literary style, the dialogue is filled with clichés which I guess are supposed to be funny.  Overall, it is not a bad “fluff” type of quick read that will likely appeal to kids who have a taste for Star Trek/Star Wars sort of science fiction.

This entry was posted in science fiction. Bookmark the permalink.