How to Debate Leftists and Destroy Them: 11 Rules for Winning the Argument

Posted on October 17, 2014 by homeschoolbookreviewblog 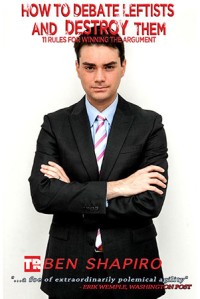 Book: How to Debate Leftists and Destroy Them: 11 Rules for Winning the Argument

Shapiro, Ben.  How to Debate Leftists and Destroy Them: 11 Rules for Winning the Argument (published in 2014 by Truth Revolt, a division of David Horowitz Freedom Center, P. O. Box 55089, Sherman Oaks, CA 91499).  Recently, a friend loaned me his copy of this book, actually a pamphlet, to read.  The problem, as author Ben Shapiro puts it is that “because conservatives don’t think about how to win that they constantly lose” in confrontations with leftists. The solution is to stop taking the bullying and learning to argue for victory.  Three of Shapiro’s rules for beating the left in confrontations are as follows.   1. Be willing to take a punch. Conservatives tend to shy away from confrontations because the left is rhetorically violent; but it is important “to walk toward the fire.”   2. Hit hard, hit first.  Leftists stage muggings; instead of fighting by Marquis of Queensberry rules, so conservatives need to accept the strategy of Mike Tyson. “Everybody has a plan until they get punched in the mouth.”  3. Immediately frame the debate.  “When you’re discussing global warming , for example, the proper question is not whether man is causing global warming but whether man can fix global warming—a question to which the universally acknowledged answer is no unless we are willing to revert to the pre industrial age.”

There are eight more rules that will allow a conservative to debate a leftist and win the argument.  Some reviewers, undoubtedly leftists, totally misunderstand what Shapiro is saying and conclude that all conservatives are being told to do is call liberals bad names.  Well, when leftists constantly call George W. Bush a Nazi with the mantra “Bush lied—people died” (which we now know was in itself a lie since ISIS has found the chemical weapons which Sadaam Hussein had and cleverly hid), say that Republicans are promoting dirty water and polluted air, and picture conservatives as wanting to starve little children and throw old people out over the cliff, we have to fight back, fighting fire with fire.  There is a time to “Answer a fool according to his folly, lest he be wise in his own eyes” (Proverbs 26:5).  Sometimes it’s necessary to call a spade a spade.  The booklet doesn’t give any formal rules for debate and really doesn’t address issues that are topics of debate. I myself wished that it had a little more substance, but it’s a quick, easy read that describes how to frame arguments, which is the first and most important step in a debate and which liberals are very good at.  It is also available to buy for downloading to a Kindle and to read free in a PDF from the publisher’s website.