Posted on February 9, 2015 by homeschoolbookreviewblog 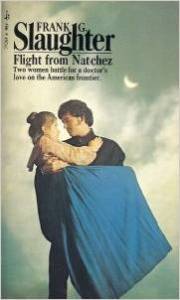 Slaughter, Frank Gill.  Flight from Natchez (published in 1955 by Doubleday and Company, Inc., Garden City, NY).  It is 1781, and the American colonies are in rebellion against King George III.  Dr. John Powell, originally from a Loyalist family of Philadelphia, PA, and now a surgeon in the British army stationed in Pensacola, West Florida, is cashiered out of the service because of a false charge of stealing.  He is then invited by the visiting Stella Wright to join the practice of her ailing doctor husband, Evan, at the English colony of Natchez.  John decides to go because he has fallen in love with Stella.  On his way there, he stops in Mobile and wins a round of poker from a stranger.  Later that evening, after his opponent has disappeared, he learns that among his winnings is the stranger’s niece, Faith Gordon.  They travel to Natchez together, pretending to be husband and wife for her protection.

After settling in at Natchez, they learn that the Spanish governor of New Orleans, who has sided with the American colonists, is planning to attack the English settlers.  Powell leads a band of 100 refugees through the wilderness to the English colony at St. Augustine in East Florida.  Along the way, they experience Indian attack, drought, fire, flood, and even smallpox.  Will they reach their destination?  Will they even survive the trek?  And will John choose to go with Stella or Faith?  Flight from Natchez is a fictionalize retelling of a true story that author Frank G. Slaughter found in Pickett’s History of Alabama.  The book is said to be “one of the raciest” novels to come from Slaughter.  I guess that it all depends on how one defines racy.  It is true that mention is made to a couple of women in Pensacola who bestow their favors on soldiers for certain considerations, and that Powell’s original intent was to “cuckold thoroughly” Dr. Evan Wright.

However, no actual immorality occurs.  There are references to drinking alcohol, smoking tobacco, gambling, dancing, and swearing.  The “d” and “h” words are used a few times, and John seems to say “damnation” a lot.  Of course, the action takes place during wartime, so there are scenes of attacking and killing.  They are recorded rather graphically but not gruesomely or gratuitously.  For these reasons, I would not recommend it for younger children or even a family read aloud.  However, it is a very interesting plot that is well-crafted and easy to follow, with a great deal of excitement and suspense, as well as an element of romance.  There are also occasions where the Bible is read, prayer is offered, and “the grace of the Almighty” is thanked.  I have read and reviewed another of Slaughter’s novels, The Land and the Promise, which is an interesting recounting in a narrative fashion, as if written by a novelist, of the great Bible stories.