They Heard Him Gladly: A Critical Study of Benjamin Franklin’s Preaching

Posted on February 21, 2015 by homeschoolbookreviewblog 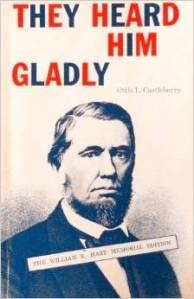 Book: They Heard Him Gladly: A Critical Study of Benjamin Franklin’s Preaching

Castleberry, Ottis L.  They Heard Him Gladly: A Critical Study of Benjamin Franklin’s Preaching (published in 1963 by Old Paths Publishing Company).  Everyone knows who Benjamin Franklin was, don’t they?  Well, maybe not. Benjamin Franklin (February 1, 1812 –October 22, 1878) was an important conservative figure in what is often called “the American Restoration Movement,” especially as the leading antebellum conservative in the northern United States branch of the movement.  Born in present-day Belmont County, OH, Franklin was a fourth-generation descendant of a brother of American Revolutionary War figure Benjamin Franklin, for whom he was named.  His early religious training was according to the Methodist faith.  When Franklin was near 21 years old, his father Joseph moved the family to Henry County, IN.  Franklin married Mary Personet on December 15, 1833, and they went on to have eleven children.  In November 1834, pioneer Restoration Movement preacher and elder Samuel Rogers moved to Henry County from Kentucky, becoming a neighbor of the Franklin family. Rogers began to preach non-denominational, New Testament doctrine using a local schoolhouse, and Franklin was baptized in 1836 by Rogers.

Franklin began preaching at New Lisbon, IN, in 1842. He began publishing his Reformer in 1845, soon changing the name to Western Reformer. He moved to Milton, IN, in 1846 and published the journal from his own shop. This publication was to be merged with Hall’s Gospel Proclamation as the Proclamation and Reformer in 1850.  After changing residences several times in Indiana and Ohio, Franklin settled in Cincinnati, OH, in 1850, where he remained for fourteen years. Later, Franklin published the Christian Age with collaborator David S. Burnet. His last publication was the American Christian Review begun in 1856.  Franklin’s last move was to Anderson, IN, where he lived from 1864 until his death. In 1871 Franklin gave a series of sermons at Wellsburg, WV. It was here that he attracted the interest of a young Bethany College student named Daniel Sommer, becoming a lifelong mentor of Sommer, whose support of the 1889 Sand Creek Declaration set in motion events which led to the formal division of the Churches of Christ from the Disciples of Christ in 1906.  Franklin died suddenly at his home in Anderson, IN.

In They Heard Him Gladly, author Ottis L. Castleberry focuses on the vibrant interaction between Benjamin Franklin’s preaching and his listeners’ reactions.  Castleberry did his 1956 doctoral thesis at Pennsylvania State University on “A Study of the Nature and Sources of the Effectiveness of the Preaching of Benjamin Franklin in the Restoration Movement in America 1840-1878.”   The book draws much of its material from the research for the thesis.  I can remember seeing the book heavily advertised in papers published by brethren when I was growing up.  After a brief biography of Franklin, there are a couple of chapters about Franklin’s views on preachers and preaching, nine analytical outlines of some of his well-known sermons, and eleven complete manuscripts of some Franklin sermons which have not been generally available.  It would probably appeal not to the general public but primarily to those interested in Restoration history.  However, I found it fascinating.