We Were There With the Mayflower Pilgrims

Posted on February 26, 2015 by homeschoolbookreviewblog 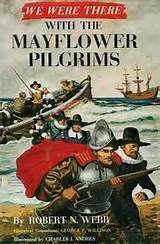 Book: We Were There With the Mayflower Pilgrims

Webb, Robert N.  We Were There With the Mayflower Pilgrims (published in 1956 by Grosset and Dunlap Publishers, New York City, NY).  It is 1620, and fourteen year old Dickon Whitcomb and his thirteen year old sister Patience have been living in Leyden, Holland, since moving there from England with their parents eight years previously.  However, the Whitcombs return to England because Mr. and Mrs. Whitcomb are to sail with the Pilgrims on the Speedwell to the New World, while the children are to be left in England with their grandparents because of the danger.  The brother and sister do not want to stay behind.  Fortunately for them, there is a series of mishaps which cause the parents finally to decide to take Dickon and Patience with them on the Mayflower.  Will they survive the journey?  Will they make it in the New World?

We Were There With the Mayflower Pilgrims is Volume #7 of the “We Were There” Books, a series of excellent historical novels that were written for children. The original set consisted of 36 titles, first released between 1955 and 1963 by Grosset and Dunlap. This book is a fictional retelling of the coming of our Pilgrim forefathers.  The Whitcomb family is fictitious, but all the other characters mentioned and most of the events described are historically accurate.  The euphemistic word “drat” appears once. These books typify the wonderfully well-written, attention-catching kind of historical fiction with exciting stories which young people devoured and by which they absorbed history in my youth and previous generations.  It is too bad that such things are not as readily available today.