Posted on May 15, 2015 by homeschoolbookreviewblog 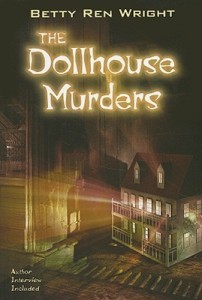 Recommended reading level: Ages 9 and up

Wright, Betty Ren.  The Dollhouse Murders (published in 1983 by Holiday House Inc., 18 E. 53rd St., New York City, NY  10022; republished in 1985 by Scholastic Inc., 730 Broadway, New York City, NY  10003).  Twelve, almost thirteen, year old Amy Treloar lives in Claiborne with her father, mother, and eleven year old sister Louann who is brain damaged and attends Stadler School for Exceptional Children.  Amy’s new best friend at her school is Ellen Kramer whose family has just recently moved to town.  Amy is tired of constantly having to help take care of her sister, so when her father’s sister, Aunt Clare, returns from her home in Chicago temporarily to get the old house of Amy’s great-grandparents near Rainbow Falls cleaned out and ready to sell, Amy jumps at the invitation to spend some time there with her. As she and her aunt sort through clothes, trinkets, and other memorabilia in the attic, Amy comes across a long-forgotten dollhouse, a finely crafted replica of the house they are in, which Clare’s grandmother gave to her as a fifteenth birthday present. However, Claire seems unusually distressed about it, and Amy wonders why.

In the process of talking to her aunt and doing her own research, Amy learns that when her grandparents were killed in an accident, her then teenaged aunt and very young father came to live with her great-grandparents.  She also finds out why Aunt Clare is so distressed—the great-grandparents were murdered in the house “by person or persons unknown” back in 1952.   Also, Clare’s fiancé, who died in a car accident that same night, was the prime suspect in the unsolved case, so Clare blames herself for her grandparents’ deaths because she had argued a lot with them over their objections to her seeing her boyfriend.   When Ellen comes over to the house for a birthday party, the girls hear scratching and scurrying noises coming from the dollhouse, the dolls they have played with, which represent Amy’s relatives, are not where they left them, and the dollhouse is filled with an eerie light.  And worse yet, her aunt won’t believe Amy when she tells her about what she sees.

Are the dolls trying to tell Amy something? Are their movements connected to the grisly murders of her own great-grandparents?  Who committed the murders?  And might history repeat itself?  This macabre, almost Gothic-like fantasy mystery for middle grade readers has a very exciting and suspenseful plot that is hard to put down.  Of course, those who object to ghost stories will not like the book, and some of the action might be a little intense for younger readers, but I enjoyed the novel immensely.  As to language, there are a few common euphemisms (darn, blasted), but nothing worse.  A couple of references to smoking a pipe and smelling tobacco smoke occur.  However, it is made clear that both Amy and Ellen attend church.   There is also the added benefit of seeing Amy’s attitude towards her younger sister and their parents develop as a result of her experiences.  This book has won the Texas Bluebonnet Award (1986), Pacific Northwest Library Association Young Reader’s Choice Award (1986), Iowa Children’s Choice Award (1988), New Mexico Land of Enchantment Award (1988), and Rebecca Caudill Young Reader’s Book Award (1989), among others.