Comanche: The Story of America’s Most Heroic Horse

Posted on May 26, 2015 by homeschoolbookreviewblog 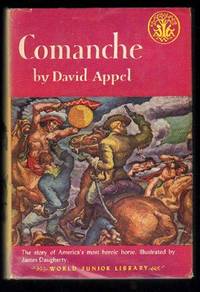 Book: Comanche: The Story of America’s Most Heroic Horse

Appel, David.  Comanche: The Story of America’s Most Heroic Horse (published in 1951 by The World Publishing Company, New York City, NY).  Comanche is a chestnut or yellowish bay horse known as a claybank sired among a herd of wild horses somewhere near the Black Hills in the Dakota Territory during a raging blizzard around 1860.  As a three year old mustang, he is captured by a twelve year old Dakota Sioux boy named White Bull, who calls him Prairie Boy and treats him kindly but is later forced to give him to his cousin, Yellow Bull, who treats him badly.  The horse escapes two years later during a raid but after joining up with another wild herd is recaptured, this time by a young boy named Bob Zieglar and sold in 1868 to a U. S. Cavalry officer, Captain Myles Keogh, who names him Comanche.  On June 25, 1876, he goes with his master into battle under General George Armstrong Custer with the Indians at the Little Big Horn River.  What will happen to Comanche?

Comanche was a real mixed-breed horse who served with Custer’s detachment of the United States 7th Cavalry at the Battle of the Little Bighorn.  Thus, the book is based on a true story.  The author’s Prologue states, “Much of this narrative is based on historical fact; some of it is pure fiction.”  It is evenhanded with some good and some bad among both whites and Indians.  Custer does not come out pictured very well at all.  There is one common euphemism (“darned”) but no cursing or swearing.  Be aware that it is not for the faint of heart.  At one point, Comanche suffers such mistreatment at the hands of Yellow Bull that he contemplates suicide.  And the plot involves the Indian Wars with vivid descriptions of shooting, bleeding, killing, scalping, and such like.  However, kids who enjoy high adventure stories, especially about cowboys and Indians, those who are into horses, and anyone interested in the Battle of the Little Big Horn, will like this story.  I would have absolutely loved this book as a teenager.  It was the basis for the 1958 live action Walt Disney film Tonka with Sal Mineo, one of my all time favorites.