A Change of Habit: The Autobiography of a Former Catholic Nun

Posted on July 31, 2015 by homeschoolbookreviewblog 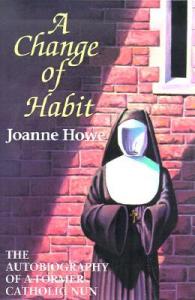 Book: A Change of Habit: The Autobiography of a Former Catholic Nun

Howe, Joanne.  A Change of Habit: The Autobiography of a Former Catholic Nun (published in 1986 by Christian Communications, a division of Gospel Advocate Company, P. O. Box 150, Nashville, TN  37202). Joanne Howe was born on Oct. 11, 1935, in Pittsburgh, PA, to devout Roman Catholic parents, the oldest of eleven children.  Her father was a teacher.  At six weeks, her twin sister Jeanne died, and when Joanne was ten her nine year old brother Raymond went missing and was later found killed by a molester.  At age thirteen, she determined to become a nun, and after attending Catholic parochial schools through eighth grade, she entered high school at the Preparatory School of the Sisters of St. Francis of Millvale, PA, but because of difficulties finished her senior year at the all girls’ Sacred Heart High School.  Then she entered the Postulancy at the Motherhouse of the Sisters of St. Joseph in Baden, PA, where she ultimately became a Novitiate, later serving as a teacher in several local Catholic mission schools.

During all this time, Joanne’s only desire was to serve God, but she continually felt empty, unfulfilled, and conflicted, so after nineteen years as a nun, she decided to leave her vocation in 1968 and, moving to Baltimore, MD, she worked with a Catholic educational organization and started dating, but continued to experience depression, headaches, tension, and anxiety.  A teacher friend named Barbara suggested that she see a counselor, Paul Coffman, who was also “a preacher of the Gospel.”  He began teaching her the Scriptures and leading her to discover the truth.  She resisted for a good while, but four years later she found her peace as she learned the error of Catholicism, accepted the teachings of God’s word, obeyed the gospel, and became a New Testament Christian, exchanging her old habit of the nun for a new life-changing habit of obedience to God’s will.

A Change of Habit is not always easy to read and follow, but anyone curious about learning what it takes to become a nun and how nuns live will find it fascinating.  It does mention the problem of lesbianism among nuns.  Of course, Roman Catholics will not like this book.  One person who had been a “Protestant Christian” for twenty plus years but became a Catholic some years ago felt that Ms. Howe is a bitter, angry woman.   I did not get that sense at all.  Another person hoped that “she would finally develop a deep relationship with God to help her get through all of the struggles in her life; instead she consulted a minister that read tarot cards and predicted her future.”  Uh, there’s absolutely nothing like that in the book I read.  The last chapter and the Epilogue present a rousing contrast between the teachings of Roman Catholicism and the teachings of the Bible, much of which led Joanne to renounce the error and follow the truth.  She is now a retired elementary school teacher and a popular speaker at women’s retreats.