Posted on February 9, 2016 by homeschoolbookreviewblog 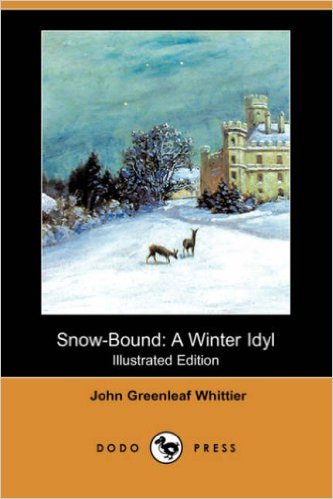 Whittier, John Greenleaf.  Snow-Bound: A Winter Idyl (originally published in 1866 by Ticknor and Fields, Boston, MA; republished in 2008 by Dodo Press).   When I was a junior in high school (1970-1971) our English class studied American literature, and we had to read large portions of John Greenleaf Whittier’s poem Snow-Bound.  Also, in the homeschool literature programs we used with our boys, they had to read sections of Snow-Bound too.  John Greenleaf Whittier (December 17, 1807 – September 7, 1892) was an influential American Quaker poet and ardent advocate of the abolition of slavery in the United States. Frequently listed as one of the Fireside Poets, he was influenced by the Scottish poet Robert Burns and by the doctrines of his religion.

Although he received little formal education, Whittier is remembered particularly for his anti-slavery writings as well as his book Snow-Bound: A Winter Idyl, which is a long narrative poem first published in 1866 as a book-length poem.  Though written in Whittier’s home in Amesbury, MA, the poem takes place in what is today known as the John Greenleaf Whittier Homestead, which still stands in Haverhill, MA, and chronicles a rural New England family as a snowstorm rages outside for three days. Stuck in their home for a week, the family members exchange stories by their roaring fire.

Whittier began the poem originally as a personal gift to his niece Elizabeth as a method of remembering the family.   Nevertheless, he told publisher James Thomas Fields about it, referring to it as “a homely picture of old New England homes.”   The poem attempts to make the ideal past retrievable. By the time it was published, homes like the Whittier family homestead were examples of the fading rural past of the United States. The use of storytelling by the fireplace was a metaphor against modernity in a post-Civil War America which is combated against through the rustic family’s nostalgic memories.  It takes one back to a different time.   I’m not a big fan of poetry, but I do like Whittier, and I like Snow-Bound.