Posted on February 18, 2016 by homeschoolbookreviewblog 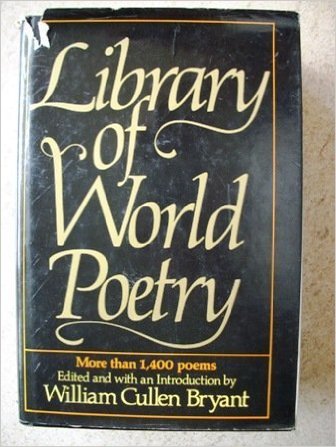 Bryant, William Cullen, editor.  Library of World Poetry (originally published under the title A Library of Poetry and Song in 1870 by J. B. Ford and Co.; republished in 1970 by Avanel Books, a division of Barre Publishing Inc., New York City, NY).  William Cullen Bryant (November 3, 1794 – June 12, 1878) was an American romantic poet, journalist, and long-time editor of the New York Evening Post.  Bryant was born on November 3, 1794, in a log cabin near Cummington, MA.   He was the second son of Peter Bryant (1767-1820), a doctor and later a state legislator, and Sarah Snell (1768-1847).  Bryant developed an interest in poetry early in life.  After just one year at Williams College he hoped to transfer to Yale, but family finances would not support it. His father counseled a legal career as his best available choice, and the disappointed poet began to study law, was admitted to the bar in 1815, and began practicing law in nearby Plainfield, walking the seven miles from Cummington every day. On one of these walks, in December 1815, he noticed a single bird flying on the horizon; the sight moved him enough to write “To a Waterfowl.”

“Thanatopsis” is Bryant’s most famous poem, which Bryant may have been working on as early as 1811. In 1817 his father took some pages of verse from his son’s desk, and submitted them to the North American Review.  The editor, Edward Tyrrel Channing, read the poem to his assistant, Richard Henry Dana, who immediately exclaimed, “That was never written on this side of the water!”  Someone joined two of the son’s fragments, gave the result the Greek-derived title “Thanatopsis” (“meditation on death”), and published it.  After that, Bryant’s poems began appearing with some regularity. “To a Waterfowl,” which was published in 1821 and called one of the finest short lyrics in the English language by Matthew Arnold, was the most popular. Other poems, such as “To the Fringed Gentian” (1832), printed during the next several decades, brought him recognition both at home and abroad as the leading poet in the United States. When he was nearly 80 years old, he translated the Iliad and Odyssey of Homer into English blank verse. After serving as editor-in-chief of the New York Evening Post from 1829 until his death in 1878 and being an early supporter of the fledgling Republican party in the 1850s, Bryant died in 1878 of complications from an accidental fall suffered after participating in a Central Park ceremony honoring Italian patriot Giuseppe Mazzini.

The World Library of Poetry, subtitled “Being choice selections from the best poets with an introduction” includes 1,450 poems selected by Bryant and originally published in 1870.  Arranged by category from friendship and humor to religion and tragedy, this popular collection represents the work of familiar poets from Chaucer up through Shakespeare, Longfellow, Shelley, Browning, Whittier, and hundreds more, including contemporaries of Bryant.   Black and white woodcut engravings and facsimile manuscripts enhance the charm of this volume.  Several of Bryant’s own poems are found, including “Thanatopsis,” which was one of my mother’s favorites:

“So live, that when thy summons comes to join

The innumerable caravan, which moves

To that mysterious realm, where each shall take

His chamber in the silent halls of death,

Scourged to his dungeon, but, sustained and soothed

By an unfaltering trust, approach thy grave,

Like one who wraps the drapery of his couch

About him, and lies down to pleasant dreams.”

It would make a great resource for homeschool literature studies.