Josiah for President: A Novel

Posted on February 21, 2016 by homeschoolbookreviewblog 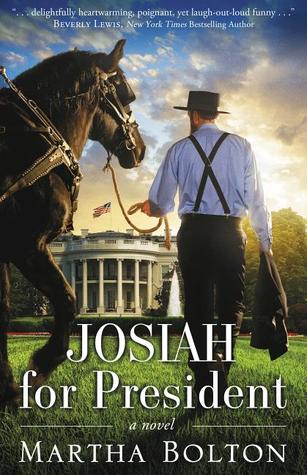 Book: Josiah for President: A Novel

Bolton, Martha.  Josiah for President: A Novel (published in 2012 by Zondervan, Grand Rapids, MI  49530).  Fifty year old Mark Stedman has been a Congressman from Wisconsin for twenty years.  His wife is named Cindy, and they have three children, teenagers Carrie and Seth, and ten year old Marcus.  Mark had decided to run for President, but trailing badly in the polls, he is eliminated by the party officials from the last primary debate, so he withdraws from the race, quits Congress, and decides to drive home.  While he takes a detour through Lancaster County, PA, due to road construction and heavy traffic, his car runs off the road and is pulled out by the horse of a nearby Amish farmer named Josiah Stoltzfus.  Mark has to spend a few days with Josiah, his wife Elizabeth, and their four children while his car is being repaired.  Their oldest child had been killed in an automobile-buggy accident the previous summer.

Mark is greatly impressed with the quiet wisdom and courage of Josiah and gets the wild idea of running him as an independent, write-in candidate against his own former party’s Harley Phillips, a senator from Mississippi, and the other party’s Karen Ledbetter, Governor of Kansas.  At first, Josiah adamantly refuses because the Amish don’t become involved in national politics.  However, the more he thinks about it, the more he wonders if the whole process which led up to the situation might not be of God’s doing, so he finally agrees, but only if Mark will be his running mate.  At the same time, his decision runs afoul of the local Amish church officials.  How will the campaign go?  Who will win the election?  And what will happen between Josiah and his bishop?  A couple of common euphemisms (blasted, dadgum–both used by Harley) occur, but there is nothing really objectionable.

The biggest complaint I saw in both professional and reader reviews is that the book has a “somewhat ridiculous premise” which “never really feels like it could be real.”  Remember, after all it is fiction.  Yet, one reviewer wrote, “Although while reading this novel, I was aware that the premise of the story was far-fetched and probably would never happen, I truly wanted this for our country.”  Evidently a lot of other people, including myself, feel the same way.  Someone else said, “This has to be the most boring book. The plot was awful. The exchange in characters dull. I don’t recommend this author to anyone; they need to rethink a career choice.”  People are entitled to their own opinions, but Martha Bolton is an Emmy-nominated and Dove-nominated author of over eighty books of inspiration and humor who was a staff writer for Bob Hope for over fifteen years.  The book has endorsements by Marsha Blackburn, United States House of Representatives; Mike Huckabee, former governor of Arkansas; and Beverly Lewis, inspirational author; among others.  It is a fascinating story, and I don’t want to give away the ending, but the reader should be prepared to shed a few tears.

This entry was posted in general youth fiction. Bookmark the permalink.