Posted on April 2, 2016 by homeschoolbookreviewblog 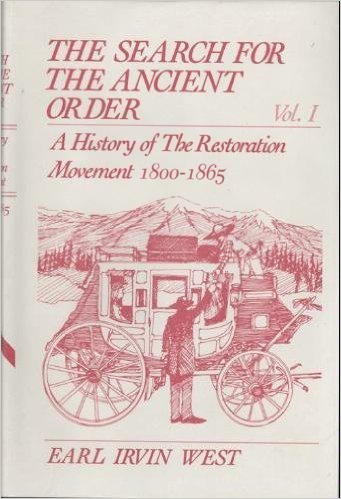 Recommended reading level: Of interest to older teens and adults

West, Earl Irvin. The Search for the Ancient Order, Vol. 1: A History of the Restoration Movement, 1800-1865 (originally published in 1949 by the Gospel Advocate Co., Nashville, TN; republished in 1990 by Religious Book Service, 3011 Woodshore Ct., Carmel, IN  46032).  The phrase “Restoration Movement” is a historical, not a spiritual, term used to describe the work of various individuals, mostly in the United States but in other countries too, who preached a return, back past denominationalism and Catholicism, to the primitive apostolic church.  It is sometimes called “the Stone-Campbell Movement,” in honor of two of the primary leaders, Barton Warren Stone and Alexander Campbell, but there were many others who paved the way before them, who worked along side with them, who labored contemporaneously but apart from or without knowledge of them, and who came after them.  Seeing a recent advertisement for the set of books about the restoration movement by Earl Irvin West entitled The Search for the Ancient Order reminded me that right after this series was completed and the earlier volumes republished, my wife, mother, and mother-in-law all conspired to purchase them for me as a present.

Vol. I, 1800-1865, covers the formative years of this great movement together with the lives of some of the great early leaders.  Vol. II, 1866-1900 (1950), discusses the traumatic years following the Civil War and the coming of liberalism. Vol. III, 1901-1918 (1979), follows the amazing growth of the brotherhood with the stunning development of both its missionary work and its educational activity.  Vol. IV, 1919-1950 (1987), describes a time of wonderful development as seen in the life and work of many workers close to the present day.  Two more volumes, which I do not own, have since been added.  Trials Of The Ancient Order: A History of the Restoration Movement from 1844-1865 concerns the most disconcerting period in American history — the stormy years between 1844-1865 –which found both the nation and the restoration movement riding on an angry sea of instability leading up to and including the Civil War and saw Christians on both sides of the issue; it is a supplement to The Search for the Ancient Order, Vol. III: A History of the Restoration Movement, 1800-1865.  The final installment of the series, Searcher for the Ancient Order: The Golden Odyssey of Earl I West, is Dr. West’s autobiography of the spiritual journey that led him from the Christianity of his early youth to the mature Christian lifestyle of a man devoted to sharing the word of God.

Author Earl Irvin West was born May 18, 1920, in Indianapolis, IN.  He attended Freed-Hardeman University, Abilene Christian University, and Pepperdine University, where he earned the B.A. degree in 1943. He attended Butler University in Indianapolis, where he received the B.D. degree. Finally, he received his terminal degree in history at Indiana University.  He began preaching in Indianapolis as a young man, and preached in different locations over the years. His main work was with the Irvington and Franklin Road congregations in Indianapolis for over forty years.  He spent a number of years at Harding University in Searcy, AR, and at the Harding Graduate School, now Harding School of Theology, in Memphis, TN.  He passed away on Friday, February 4, 2011.  Search for the Ancient Order reviews the Restoration Movement in the 1800’s and early 1900’s by blending the biographies of some of the early leaders of the movement with the history they were instrumental in making as they sought to establish the church found in the New Testament.   Several have noted that Volumes III and IV do not have the same conservative flavor as the earlier two.  However, it is still a monumental work that will be of value to anyone who is interested in “restoration history.”