Where Heaven and Mountains Meet: Zanskar and the Himalayas

Posted on April 11, 2016 by homeschoolbookreviewblog 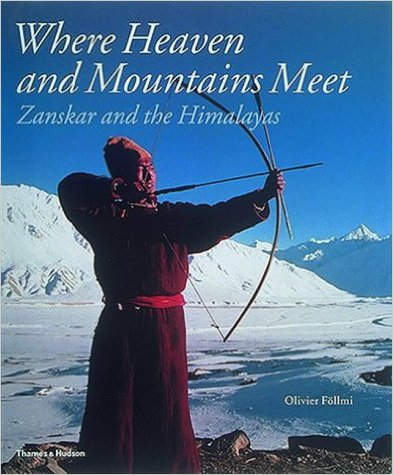 Book: Where Heaven and Mountains Meet: Zanskar and the Himalayas

Follmi, Olivier.  Where Heaven and Mountains Meet: Zanskar and the Himalayas (originally published in French in 1997 by Editions de la Martiniere, Paris, France; English translation published in America in 1999 by Thames and Hudson Inc., 500 Fifth Ave., New York City, NY  10110).  Zanskar is a small ancient kingdom of about 10,000 people deep in the heart of a remote Himalayan Mountain valley area on the eastern side of the Indian state of Kashmir, isolated from the outside world by snow for nine months of the year.  The people are mostly followers of Tibetan Buddhism who are isolated by the high mountains and until recently had little contact with the outside world. Beginning at age twenty, author Olivier Follmi, a French photographer who became attracted to the area in the 1980s, has made numerous trips to Zanskar over a 20-year period.  I do not recall exactly how I came to have this book, but it records some of Follmi’s visits, telling the story of his fascination with Zanskar and providing a record of the rites and customs of the land.

Where Heaven and Mountains Meet is basically a coffee-table type of book containing Folllmi’s photographs of the extraordinary landscape and portraits of its people, along with delicate, hand-painted watercolors by Tibetan artist Rapkar Wangchuk which seek to recreate the quintessential images of Tibetan Buddhism.  I do not know what the author’s religious beliefs are.  Many Westerners have turned to Eastern religions.  However, the Zanskaris are definitely Buddhist, and the commentary contains a lot of references to Buddhist theory and practice.  If one is interested in a volume with breathtaking pictures of the Himalayas and information about the culture of this region, including its religion and how its observance defines the people’s way of life, the book is not bad.

However, there are several occurrences mentioned of drinking various alcoholic beverages common among the Zanskaris.  In discussing the acceptance of polyandry in Zanskar, Follmi, who himself is married to his wife Danielle, records how he is invited and even encouraged to commit adultery with the wife of one of his Zanskari friends as an “act of love.”  As he notes, “[L]ove between the sexes is on a relatively easy footing in Zanskar.  Fidelity is not important.”  However, he feels “inhibited,” and nothing actually happens.  Not really appropriate material for the kiddos!  Born in 1958 at Saint-Julien-en-Genevois, France, of Latin and Germanic descent, Olivier Föllmi published an earlier collection of photographs of the region entitled Zanskar: A Himalayan Kingdom (1989).  He and Danielle are the founders of HOPE (Himalayan Organization for People and Education), which supports educational projects in the Himalayas.