Women of the Bible

Posted on September 10, 2016 by homeschoolbookreviewblog 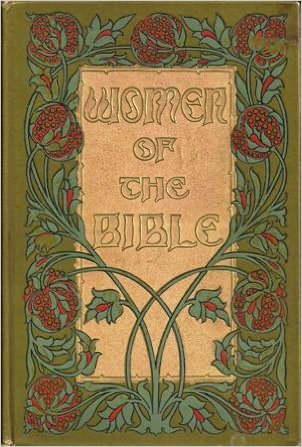 Book: Women of the Bible

Harvey, George B. M., and Jordan, Elizabeth, editors.  Women of the Bible (published in 1900 by Harper and Brothers Publishers, New York City, NY).  The twelve chapters in this book cover the lives of thirteen Biblical women—Eve, Sarah, Rebekah, Miriam, Deborah, Ruth, Hannah, Jezebel, Esther, Mary Magdalen, Mary and Martha, and the Virgin Mary.  Originally a series of sketches that first appeared in Harper’s Bazar (later Harper’s Bazaar) magazine, they were written by “Eminent Divines,” including John W. Chadwick (Unitarian), Lyman Abbott (Congregationalist), Henry Van Dyke (Presbyterian), Bishop William C. Doane (Episcopalian), and Cardinal James Gibbons (Roman Catholic), all of whom were well-known as religious leaders in their day.  The last-named individual, as you might guess, did the chapter on the Virgin Mary.  When the book was published, George B. M. Harvey was the chief editor at Harper and Brothers, and Elizabeth Jordan was the editor of Harper’s Bazar.

Some of the information is fairly accurate, but most of the authors were rather liberal in their theology and one may have to look out for the occasional statement or concept that is based more on human wisdom or tradition rather than Biblical fact, especially in the articles by Chadwick and Gibbons.  If I remember correctly, I believe that this book was given to me by a good sister in a congregation where I once labored who worked at Goodwill and often set aside volumes that she thought preachers might like to have.  It is interesting reading, if one can overlook the modernism, and would be a possible resource for a study of these women mentioned in the Bible.  This title is not to be confused with another book having a similar name, Women of the Bible: A Series of Story and Character Sketches of the Great Women Who Have Aided in Making Bible History, authored by Willard Done and also published in 1900.