The Island of Dr. Libris

Posted on October 28, 2016 by homeschoolbookreviewblog 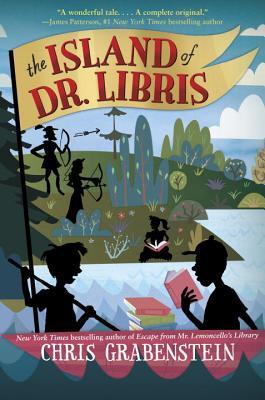 Book: The Island of Dr. Libris

Grabenstein, Chris.  The Island of Dr. Libris (published in 2015 by Random House Children’s Books, a division of Penguin Random House LLC, New York City, NY).  Twelve year old Billy Gillfoyle lives with his dad William or Bill, a writer of cool TV commercials, and mom Kimberly or Kim, a college math professor.  Billy loves comic books, I-pods, TV, his computer, and video games but is spending the summer without all those things with his mom in a rented cabin owned by her boss Dr. Xiang Libris way off at remote Lake Katrine which has a big island in the middle of it.  There seems to be a lot of arguing between his parents.  Dad isn’t staying because he says that he has work to accomplish, and Mom is busy writing her doctoral thesis, so Billy has nothing to do except read the books in Dr. Libris’s library.  That’s when strange things begin happening.

While reading The Labors of Hercules, Billy hears and sees fighting over on the island between Hercules and Antaeus.  He later rows to the island with a copy of Robin Hood and meets the famous outlaw along with Maid Marian while Hercules joins their band against the Sheriff of Nottingham.  On other trips with different books, the Three Musketeers and their friend D’Artagnan side with the Sheriff, and both Tom Sawyer and Pollyanna appear to help Billy.  And then there’s Jack in the Beanstalk’s giant.  What’s going on?  Are these actors or maybe holograms—or just his imagination?  Is there some kind of plot behind all this?  I think that The Island of Dr. Libris is a pretty good book.  There are a few common euphemisms (heck, golly, omigosh) and some childish slang (butt for rear end, poop for horse manure), but no cursing or swearing and nothing else in the way of major objections.

What I liked about the book was first it encourages youngsters to use their imaginations and second it introduces them to great literature.  The short chapters are perfect for reluctant readers, especially boys, and will draw them into the stories in such a way as to stimulate an interest in reading them.  Let me quickly add that I personally would not recommend either The Labors of Hercules or The Three Musketeers for young children except in expurgated versions because both have a lot of immorality in them.  The only downside is the underlying tension that apparently exists between Billy’s mom and dad and his worry that they might get a divorce.  When his dad comes to visit and tell him “the news,” he even tries a harebrained scheme to keep them together, but without giving too much of the story away, I’ll just say that all’s well that ends well.  I enjoyed reading the story. Grabenstein is also the author of Escape from Mr. Lemoncello’s Library.