Princess Juniper of the Hourglass

Posted on January 6, 2017 by homeschoolbookreviewblog 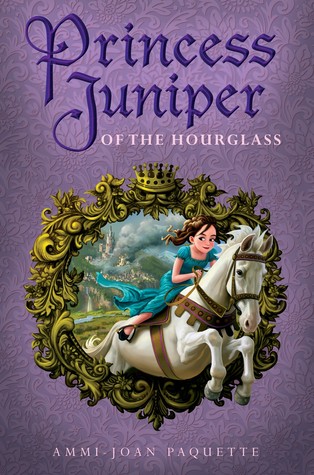 Book: Princess Juniper of the Hourglass

Paquette, Ammi-Joan.  Princess Juniper of the Hourglass (published in 2015 by Philomel Books, an imprint of Penguin Group USA, a division of Penguin Random House LLC, 375 Hudson St., New York City, NY  10014).  Princess Juniper Torrence is the daughter of King Regis of Torr.  She had been young when her mother, Queen Alaina from the Anju, died.  For her thirteenth name day, Juniper asks the King for a very small country of her own to rule over.  So, after mulling over the two most likely places, her father sends her and thirteen other young people, including ten of her own choice along with her rather petulant older cousin Cyril, son of the King’s chief advisor, and his friends Root and Jessamyn, to a remote and secret area known as “the Basin” in the Hourglass Mountains.

However, just as Juniper’s group is leaving the capital, there is word of an attack on Torr by the enemy nation of Monsia.  Then, after they begin setting up their kingdom of Queen’s Basin, strange things start happening that result in damage and destruction.  What is going on back in Torr?  Is there a traitor in their number?  If so, who is it?  And what will become of Juniper and her kingdom?  To be honest, I expected this to be a fluffy book about a prissy princess.  It is NOT!  Rather, it is an interesting and well written story with a great deal of intrigue and suspense, yet totally suitable for pre-teens and tweens.

There are a few references to balls and dancing, but no bad language or other unsuitable elements are found.  Juniper discovers that ruling a small country–even just for the summer–is a bit harder than she’d expected, especially when someone challenges her rule.  She does make some mistakes along the way, but she learns from them and truly grows in her appreciation of her friends’ abilities and in her treatment of others.  Someone said that this adventuresome tale of self-discovery is perfect for girls who like their princesses strong and smart as well as sparkly.  There is a sequel, Princess Juniper of the Anju.