Running from Safety: An Adventure of the Spirit

Posted on January 29, 2017 by homeschoolbookreviewblog 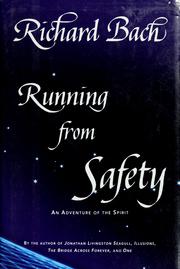 Book: Running from Safety: An Adventure of the Spirit

Recommended reading level: I would recommend it only for well-grounded adults

Bach, Richard.  Running from Safety: An Adventure of the Spirit (published in 1994 by William Morrow and Company Inc., New York City, NY; republished in 1995 by Delta Publishing, a division of Bantam Doubleday Dell Publishing Group Inc., 1540 Broadway, New York City, NY  10036).  In this fictional quasi-autobiography, Richard Bach, author of the best-selling Jonathan Livingston Seagull (1970), is paragliding and meets an angel named Shepherd who encourages him to fulfill a promise made fifty years before, to return to the frightened child that he used to be and teach him everything he had learned from living.  In this encounter with Dickie Bach, his nine year-old self, he tries to explain the things that really matter. But Bach finds that Dickie is angry and hurt at having been locked away for the last fifty years.  Richard and Dickie probe the timeless questions which both need answered if either is to be whole.  What will Dickie learn from Richard?  And can Richard learn anything from Dickie?

When I read Jonathan Livingston Seagull, I found it to be mostly psychobabble and philosophical gobblety-gook.  The same is basically true for Running From Safety.  While it does have an interesting story with some good ideas, it is based on a faulty and unstable foundation.  In the Introduction, as Bach describes his search for meaning in life I kept thinking that he should try Jesus Christ, but then he says that he decided, “Jesus doesn’t have the truth you’re looking for.”  He talks about establishing his own truth and developing his own religion.  Later in the book, the discussion about God is highly subjective, and the view of God is a New Agey, almost Pantheistic one.  The view of life is Existentialism.  “Remember that this world is not reality.  It’s a playground of appearances on which we practice overcoming seems-to-be with our knowing of Is.”

The view of truth is Relativism.  “Good and evil are not what our parents told us, not what our church tells us, or our country, not what anybody else tells us!  All of us decide good and evil for ourselves, automatically, by choosing what we want to do!”   Much of the conversation is extremely abstract, and it gets rather crazy towards the end as Richard and Dickie supposedly remember the actual events of their birth.  In addition, there is quite a bit of cursing and profanity along with a few near vulgarisms. Some people might find the story interesting, but I didn’t and can’t really recommend it.  I remember reading somewhere that some people think that this book may have been the inspiration, at least in part, for the 2000 Walt Disney film The Kid, in which Bruce Willis stars as a man who meets a boy who is actually himself as a kid, but Disney Studio denies it.

This entry was posted in Uncategorized. Bookmark the permalink.