The Story of Mankind

Posted on March 9, 2017 by homeschoolbookreviewblog 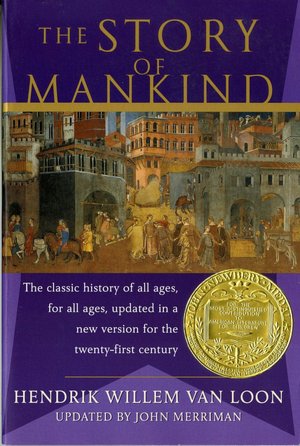 Book: The Story of Mankind

Van Loon, Hendrik Willem.  The Story of Mankind (originally published in 1921 by Boni and Liveright Inc.; updated edition published in 1984 by Liveright Publishing Corporation, 500 Fifth Ave., New York City, NY  10110).  This book, winner of the first John Newbery Medal awarded in 1922, purports to be a history of the world.  From a positive standpoint, it is written in an interesting and engaging fashion that is intended to be understood by and appeal to children through the use of humor with short chapters for easy reading.  However, even plusses can have their minuses.  The fact that it is designed for children means that some degree of oversimplification occurs at times with coverage so shallow as to be misleading.  And what is meant to be humorous may occasionally seem to poke fun at things which many people feel are quite serious.  Two major criticisms have been leveled at the book.  The first is that it is almost unforgiveably “Euro-centric,” with Asia, Africa, and South America mentioned only as they have contact with European interests.  This doesn’t bother me.  This book was written for Americans, and our background as a society is NOT based on Asian, African, or even Meso-American culture but on Western Culture.  Perhaps a better title would have been The Story of Western Civilization, but this should be no big problem.  Also, there are a few historical errors, mostly things which were once almost universally thought to be true but which have been shown to be false by later research.

The second objection is more serious. In And the Winner Is…: A Guide to Newbery Medal Winners from a Christian Perspective, Barb Brandes and Deb Ekstrand note that “The first three chapters present evolution as the start of mankind; and this ‘beginning’ is referred to throughout the book.”  The chapter on “The Age of Science,” is very pro-Darwin.  When any “historian” claims to discuss events that took place even 500,000 years ago, let alone millions of years ago, he is acting on pure imagination and speculation because there are just no records that old.  Interestingly, written records of earth’s history begin at a time that is quite in harmony with the Biblical account of creation.  Also, while Van Loon probably claimed to be a “Christian,” making numerous references to God, Jesus, and the Bible, the book exhibits a rather skeptical view of Christianity.  It is granted that many people who called themselves “Christians” have done bad things, but the author seems to take delight in making regular digs at Christianity.  The Reformation is pictured as anti-science.  Some bad economic principles are cited which were said to “accepted with the same unquestioning faith with which the early Christians believed in miracles.”  The chapter on art talks about some “Christians, who still regarded music with deep suspicion as something which was too lovely to be entirely good for the soul.”  And, of course, the multicultural view is presented that Christianity, Judaism, Islam, Buddhism, and Confucianism should all be considered on the same level as equally good.

As to his purpose, Van Loon says, “It is the duty of the honest chronicler to give a true account of all the good and bad sides of every historical event.”  This is the way that it should be, but rather than simply giving a true account of historical events with the good and bad sides, he does a lot of editorializing along the way.  And his understanding of “good and bad” is often very subjective and sometimes borders on sheer relativism.   Instead of the story of mankind, what we have here is Hendrick Willem Van Loon’s opinionated explanation of what he considered important in the history of the world.  After publishing the book in 1921, Van Loon added a chapter in 1926 to describe the after-effects of World War I, which I think contains far more philosophizing than history.  In 1972 several more chapters were written by his son Willem to cover the Great Depression, World War II, the United Nations, the Cold War, and the space race.  Then in 1984 John Merriman, professor of history at Yale University updated it with a chapter “Approaching the Year 2000.”  One caution to be noted is that this final chapter does make brief mention of the “gay rights” movement.  The Story of Mankind might be a pleasant diversion, but if one really wants to learn about the history of the world, there are much better resources.