Posted on May 14, 2017 by homeschoolbookreviewblog 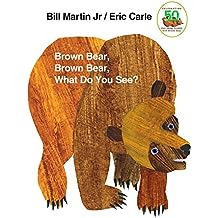 Martin, Bill Jr.  Brown Bear, Brown Bear, What Do You See? (published in 1967 by Holt Rinehart and Winston, a division of Henry Holt and Co. LLC, 175 Fifth Ave., New York City, NY  10010).  Children see a variety of animals, each one a different color, such as a big brown bear, a vivid red bird, a soft yellow duck, a happy green frog, a plump purple cat, and a handsome blue horse, all parading across the pages of this delightful book, and a teacher looking at them.  Each one is illustrated by Eric Carle’s flat, boldly colored collages.  Combined with Bill Martin’s repetitious, singsong text which children dearly love to hear, the pictures create unforgettable images of these endearing beasts in such a way as to help preschoolers become acquainted not only with identifying the creatures themselves but also with recognizing the different colors.  It also makes an excellent book for beginning readers.

On a train ride in 1966, the title phrase “Brown Bear, Brown Bear, What Do You See?” popped into the head of author Bill Martin Jr. (1916-2004).  Later, he spotted an illustration of a red lobster in a magazine and contacted the creator, Eric Carle, to ask if he would illustrate his story.  It was first published in 1967 with a slightly different format by Henry Holt’s School Division.  The first general version came out in 1983.  A newly illustrated edition was produced in 1992.  And it became a padded board book in 2016.  Brown Bear and the three companion titles in the “Brown Bear and Friends” Series, Polar Bear, Panda Bear, and Baby Bear, have sold millions of copies worldwide.