Posted on July 3, 2017 by homeschoolbookreviewblog 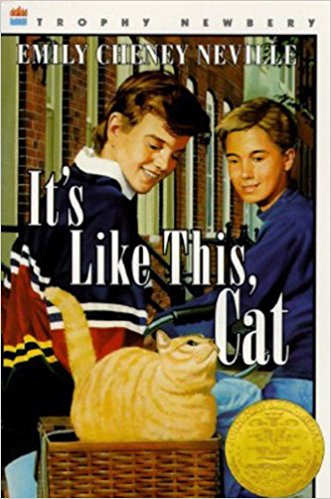 Neville, Emily Cheney.  It’s Like This, Cat (published in 1963 by Harper and Row Publishers Inc., 10 E. 53rd St., New York City, NY  10022).  Fourteen year old David Mitchell lives in a New York City, NY, apartment with his father, who is a lawyer, and his mother, who gets an asthma attack whenever Dave and his dad argue.  And they seem to argue a lot, and Dave often storms out of the house.  He says, “My father is always talking about how a dog can be very educational for a boy. This is one reason I got a cat.”  Cat is given to him by an eccentric elderly neighbor, Kate Carmichael.  Dave calls “Aunt Kate,” and she takes in stray cats.  After Dave and his best friend Nick get into a fight because Nick is paying more attention to girls than being with Dave, Dave has to find some new people to hang around with, and Cat introduces him to several interesting individuals.

Dave’s new friends include nineteen year old Tom Ransom, who helps Dave rescue Cat from a basement trap but has been in trouble with the law; Mary, a different but wonderful girl from Coney Island whom they meet on the beach; and Ben Alstein, a fellow student at Dave’s new school.  Will Dave ever get back with Nick?  What happens as a result of Tom’s brush with the law?  How will Kate react when she inherits a huge fortune from her estranged and now deceased brother?  And as Dave comes to see the complexities in other people’s lives, does that help him to understand himself and his family a little better?  The author Emily Neville does a nice job of painting a picture of 1960’s New York City with references to Gramercy Park, Manhattan, Coney Island, Times Square, the Hutchinson River Parkway, Macy’s, and East 22nd Street where Dave and his family live.  Aside from some common euphemisms (gee, golly, heck), a few references to smoking cigarettes and drinking alcohol by adults (Dave is offered a cigarette but declines), and a mention of evolution, there is no major objectionable material.

Some may be annoyed with Dave’s somewhat sour attitude at first—one reviewer said, “Winner of my ‘Best Bad Attitude’ book,” but he learns some important lessons along the way, so the story is beneficial from this standpoint.  The biggest complaint that I saw was that there just isn’t much story here, and I admit that the plot is a little thin.  It is more a series of episodes in Dave’s life over about a year in which he figures out that maybe his father is not so bad after all.  Others may consider the publication dated with language that probably made the book current and interesting when it was published but makes it not age very well.  However, I’m just a little younger than Dave—he was a teenager in the early 60s, and I was a teenager in the late 60s, so it took me back to a simpler time in life, and I found it interesting to compare my growing up in a small, Midwestern, rural town with Dave’s experiences in the big city.  In that regard, another reviewer noted that “it marks a boundary between the ‘old’ Newberys, which seem to dwell on America’s rural, agrarian roots, and the ‘new’ Newberys, which turn a focus on America’s urban life.”  There should be room for both.