Posted on July 23, 2017 by homeschoolbookreviewblog 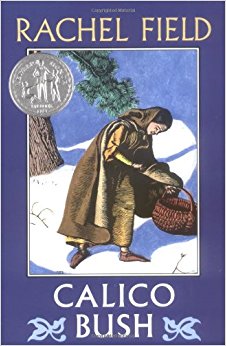 Field, Rachel.  Calico Bush (published in 1931 by Simon and Schuster Inc., 1230 Avenue of the Americas, New York City, NY  10020).  It is 1743, and twelve year old Marguerite Ledoux, whose parents are both dead, is emigrating from La Harve, France, to Louisiana in New France, with her Grandmere and Oncle Pierre.  However, Oncle Pierre dies on the ship, and when they land in Marblehead, MA, there is not enough money to go on.  Then when Grandmere dies, Marguerite must be “bound out” or become an indentured servant for the next six years to the Sargent family consisting of Joel (Joe), his wife Dolly, and their six children, thirteen year old Caleb, six year old twins Becky and Susan, four year old Patty, three year old Jacob, and one year old baby Deborah.  But the Sargents are moving to northern Maine to settle a claim that Joel had bought.

When they arrive in Maine, they find that the previous cabin had been burnt by Indians.   With the help of neighbors, they rebuild, but there is the constant threat of further Indian attacks, and the harsh winter is coming on soon.  Furthermore to the Sargents, Marguerite is “Maggie,” and they think of her as little better than the Indians who threaten them. Can Marguerite and the Sargents survive?  How does Marguerite react when their cabin is surrounded by Indians?  And what will she decide to do when offered the chance to leave for Quebec?  Calico Bush was a Newbery Honor Book in 1932.  Aside from a few colloquial euphemisms (e.g., “dad blast ye”) and instances of dancing and tobacco use, there is nothing much to which one might object.  The biggest complaint is the supposed pejorative references to “Injuns,” but the attitudes of the English people in the book toward the Indians are probably fairly accurate.

Also, with a couple of scenes where Marguerite finds a child’s scalp in a cave and where a baby is burned to death in a fire, the book might not be appropriate for sensitive younger children, but generally it is an interesting story of early settlers on the Atlantic Coast.  It includes snippets of history about the French and Indian War, Protestant-Catholic tensions, and pre-Revolutionary War life including roof-raising festivities, corn-shucking bees, and other daily trials and tribulations of pioneers in the New World.  The plot is quick-paced and engaging, and Marguerite is a well-developed, likable character who shows much grit in a harsh, often hostile environment.  Apparently, author Rachel Field, whose Hitty: Her First Hundred Years won the Newbery Medal in 1930, may have been working from a local legend when she wrote this book.  There is a grave in one of the old cemeteries of a woman named Marguerite LaCroix, “the French wife of one of the early settlers.”  She and her husband, John Stanley, moved from Marblehead after 1767 with their many children and became the first permanent residents of Little Cranberry Island.  Field did not try to tell the woman’s story exactly, but used her as inspiration for her book.