A Watcher in the Woods

Posted on October 28, 2017 by homeschoolbookreviewblog 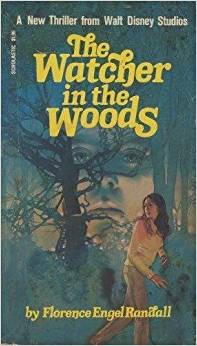 Book: A Watcher in the Woods

Randall, Florence Engel.  A Watcher in the Woods (published in 1976 by Atheneum, New York City, NY; republished as The Watcher in the Woods in 1980 by Scholastic Paperbacks).  Fifteen year old Janet (Jan) Carstairs, who narrates the story, is moving with her father Paul, mother Kate, and seven year old sister Eleanor (Ellie) from Ohio to Bywater, MA, where Mr. Carstairs, a professor, will head the English Department at the local college.  The family buys a large old house with a meadow, pond, and woods in a somewhat isolated location on the outskirts of town from eighty-five year old Mrs. Anne Aylwood.  Their nearest neighbors are the Flemings, and Jan is attracted to their nineteen year old son Mark.  She learns that fifty years ago Mrs. Aylwood lost her daughter Karen, who was fifteen at the time.  One hot July morning, the girl went out for a walk in the woods, didn’t return, and never was found.

Strange things begin to happen.  Mirrors crack, seemingly on their own, always with the same X pattern.  Jan has the feeling of being watched by someone or something in the woods.  Sometimes the feeling is cold, other times joyful, unhappy, or alarming.  Occasionally it even controls her movements.  Ellie hears humming and voices with words which she writes backwards.  One of them tells her to name her new puppy Nerak, which is Karen spelled backwards. Mark and Jan see a vision of Karen in the hollow of an old tree.  And the television turns itself on and sends messages about Karen.  What is going on?  What happened to Karen?  And who or what is the watcher in the woods?  We recently saw the 1980 Walt Disney Productions film entitled The Watcher in the Woods (subsequent editions of the novel have borne the slight change of title) starring Bette Davis and liked it, so I decided to read the book.  A little profanity occurs with the terms Lord and God used as interjections, and references to smoking a pipe are found, but there is little that one might consider unsuitable.

The biggest criticism which I saw was from someone who said, “This one seems like it was a hash job done to get something on the shelf for the movie….Clearly the author had a deadline to make and a paycheck to earn.”  Several others pointed out that the novel was written long before there was any thought whatsoever of Disney’s buying the rights for a movie, and it was purchased by the filmmakers because of its wonderfully atmospheric setting and intriguing storyline.  Thus it was by no means a rush job written simply to promote the movie.  Kirkus Reviews also gave it a negative review, calling it “sophomorically wooden.”  While many similarities between book and movie exist, there are distinct differences too.  Some people may not care for the horror-like plot, but those who enjoy young adult science fiction with a slight Gothic flavor will probably like it. It was written well enough to hold my attention.

This entry was posted in science fiction, Uncategorized. Bookmark the permalink.