Posted on December 27, 2017 by homeschoolbookreviewblog 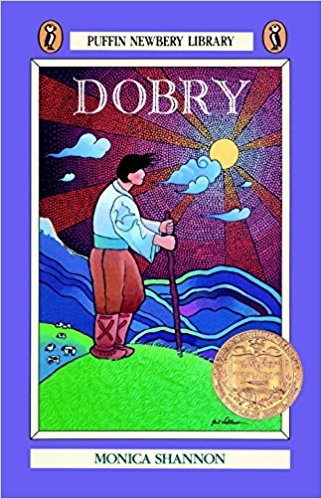 Recommended reading level: Ages 10 and up

Shannon, Monica.  Dobry (published in 1934 by The Viking Press; republished in 1993 by Puffin Books, an imprint of Penguin Books USA Inc., a division of the Penguin Group, 375 Hudson St., New York City, NY  10014).  Dobry is a young boy who lives in a small farming village of peasants in the Balkan Mountains of Bulgaria on the Yantra River.  His father “was killed in the war.”  Both his widowed mother Roda and grandfather are dedicated farmers, and Dobry spends much of his early life helping them in the fields. The majority of his free time is spent with his best friend, a beautiful little girl named Neda, the daughter of Hristu, the village shoemaker.  While still young, Dobry discovers a found love for art, in which he displays an unusually high amount of natural talent, and wishes to become a sculptor.  However, his mother becomes increasingly worried and agitated, having always assumed that Dobry would take over the family farm.

The first half of the book appears to be written when Dobry was 8 to 11 years old whereas the second half of the book covers Dobry’s life as he grows older.  Dobry’s grandfather, Neda, and several of the villagers are impressed by his ability and supportive of his dedication to his craft, but Dobry will eventually need to go to Sofia to study art further.  Will his mother agree?  How can a poor farm boy obtain the money finance his education?  And if he goes, what will happen to his growing relationship with Neda?  Author Monica Shannon Wing (1890–1965) was a Canadian-born American children’s writer who received the 1935 Newbery Medal for her book, Dobry, published in 1934.  Bulgarian-born sculptor Atanas Katchamakoff illustrated the book.

There are some minor references to smoking a pipe and drinking wine.  However, this story is rich in the cultural traditions of the Bulgarian peasants and the simple village lifestyle of the early 1900’s, including cooking in the coals of the jamal or fireplace, harvest and holiday customs, delightful songs and stories passed down from their ancestors, and visits of the gypsies with their massaging bear.  These people believe in God, and it is always nice to read about folks whose religion is an important part of their lives, although their faith is Byzantine and involves praying to saints.  The plot may move a bit slowly for youngsters whose attention spans have been shortened by television and video games, but for those willing to devote the time, it is fascinating to watch Dobry grow to young manhood and strive to follow his dream.