Through the Eye of a Needle: The Doctrine of Nonaccumulation

Posted on January 22, 2018 by homeschoolbookreviewblog 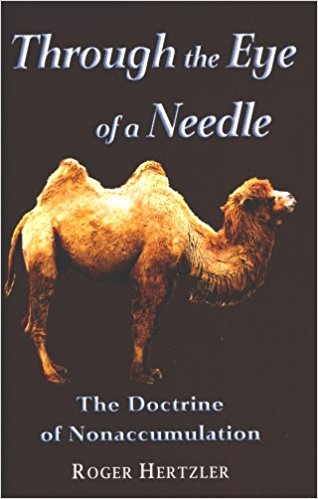 Book: Through the Eye of a Needle: The Doctrine of Nonaccumulation

Recommended reading level: I really don’t recommend it to anyone

Hertzler, Roger.  Through the Eye of a Needle: The Doctrine of Nonaccumulation (published in 2006 by Scroll Publishing Co., P. O. Box 122, Amberson, PA  17210).  I picked this book up on the free shelves at a Mennonite country store.  Its main thesis is that the Scriptures clearly teach what the author Roger Hertzler calls “the doctrine of nonaccumulation,” and defines as “stating that Jesus forbids His people to accumulate wealth on this earth, but rather commands them to distribute those possessions they do not currently need for the needs of others and for spreading the gospel.”  Hertzler does a little hedging and weaseling here and there in his application of the doctrine but otherwise holds pretty much to this definition throughout the book.  However, this raises a problem.  We can talk about the doctrine of baptism because God’s word specifically mentions baptism (1 Peter 3:21).  We can discuss the doctrine of inspiration because the Bible says, “All scripture is given by inspiration of God” (2 Timothy 3:16).  Yet the Scriptures never use the term “nonaccumulation.”  Oh, there are passages that Hertzler quotes in an effort to prop up his theory, just there are passages which Catholics use to “prove” forced celibacy of the clergy and which Jehovah’s Witnesses cite to uphold their doctrine that Jesus is a created being.  It reminds me of what Peter said about how “they that are unlearned and unstable wrest…scriptures unto their own destruction” (2 Peter 3:16).

The two main pillars upon which Hertzler builds his doctrine are Matthew 6:19, “Lay not up for yourselves treasures on earth,” and Luke 12:33, “Sell your possessions and give to the poor.”  He claims that the first should be understood not to refer to attitude toward our wealth but to mean literally that Jesus forbids His followers to accumulate wealth on this earth.  Of course, Jesus didn’t say, “Lay not up for yourselves treasures on earth” period.  He said, “Lay NOT up for yourselves treasures on earth…BUT lay up for yourselves treasures in heaven….”  Bible scholars generally understand these “not…but” passages, which they call the law of contrasts, not to say “not A which is absolutely wrong, but B which is absolutely right,” but to mean “not A which is of lesser importance, but B which is of greater importance.”  What would Hertzler do with 1 Peter 3:3-4, “Let it NOT be that outward adorning of plaiting the hair, and of wearing of gold, or of putting on of apparel; BUT let it be the hidden man of the heart…”?  The most literal interpretation of verse 3 is that the inspired apostle forbids women to put on apparel.  Does this mean that they have to go naked?  No, in both instances it is a matter of emphasis demonstrating one’s attitude towards the issues under consideration, the very thing Hertzler denies.  We should have an attitude that emphasizes laying up treasures in heaven as more important than laying up treasures on earth.  Since Luke 12:33 is in an almost identical context, we would conclude that it is simply teaching the same thing.

As Hertzler continues to propound his view and claims to answer objections to it, he gives his own unique spin to the definitions of words like “covetousness,” various passages of Scripture including the account of Ananias and Sapphira and the parable of the talents, and church history.  Certainly it is true that our society and even many in the church are materialistic.  However, in spite of this extreme interpretation of Matt. 6:19-21, we’re not instructed to take vows of poverty, but only taught to avoid storing up treasure on earth instead of trusting the Lord for our provision.  All warnings against covetousness are valid, and any book that makes us think about the Biblical teaching on possessions serves a valuable purpose.  Yet, this book is simplistic and ill-suited to the real world. It over-interprets the teachings of Christ based upon a misunderstanding of Scripture in which the author tries to weave his own presuppositions about investing into the Biblical prohibition against the hording of treasure. The central message in it simply has no biblical foundation.