Posted on January 29, 2018 by homeschoolbookreviewblog 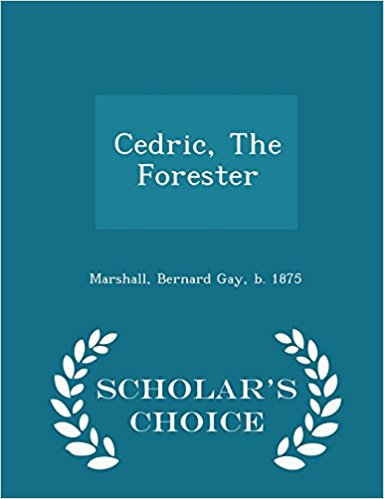 Marshall, Bernard Gay.  Cedric, the Forester (originally published in 1921 by D. Appleton and  Company, New York City, NY; republished in 2012 by Forgotten Books).  It is during the reign of King Henry (II) of Anjou, and fifteen year old Sir Richard (Dickon) Mountjoy lives with his father Robert, a knight, and his mother Kate, a daughter of the Montmorencys, at Castle Mountjoy.  While on his way to visit his cousins at Leicester, Dickon is accosted by Lionel, the 22 year old son of the Mountjoys’ oldest and bitterest enemy Lord Carleton, the Gray Wolf of neighboring Castle Teramore, and would have been killed if he had not been rescued by the crossbow of a Saxon yeoman named Cedric, a youth his own age who is the son of Elbert, forester for the Lord of Pelham.  Dickon and Cedric become good friends, and Cedric is invited to live at Castle Mountjoy and be trained to serve as Dickon’s squire.

Several adventures ensue over the next few years.  While Sir Robert and his soldiers are away with the King fighting in the Scottish Wars, Mountjoy Castle is besieged by the armies of Carleton.  Dickon and Cedric help an unjustly accused churl of Lord Gilroy’s to escape.  There is a desperate and bloody revolt of the churls on the lands of Sir Hugh DeLancey.  With Cedric’s ideas on the rights of all free Englishmen, attacks by outlaws, invasion by the Welsh, and the oppression of everyone by Henry’s son, King John, leading up to a head at a place called Runymeade, what will happen to Dickon and Cedric?  Can their friendship survive?  And what part do they play in the historical events which unfold? Cedric the Forester was published in 1921 and was a Newbery Honor recipient in 1922.

This book is not for the squeamish or faint of heart.  While it doesn’t linger on gore, neither does it gloss over the fighting and killing.  After all, it was a violent time in history.  A few references to drinking ale and wine occur.  However, not only is there an exciting story here, but also it is illustrative to see how the personal conflicts help to build Cedric’s resolve and character, and then there is the introduction to one of the single most important documents in English history (class, can we say “Magna Carta”?) which played such an important role in our Founding Fathers’ thinking.  Yes, it’s definitely a boy book, but any lad who finds thrill in reading tales about knights from the days of yore will simply love it.  I certainly did and on a scale of one to five would be tempted to give it a six!