Posted on February 8, 2018 by homeschoolbookreviewblog 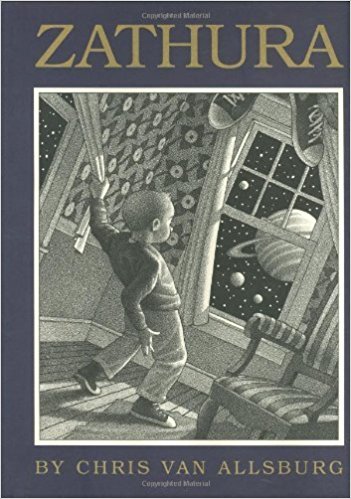 Van Allsburg, Chris.  Zathura (published in 2002 by the Houghton Mifflin Company, 222 Berkeley St., Boston, MA  02116).  Brothers Danny and Walter Budwing live with their parents.  One evening while Mr. and Mrs. Budwing are out, the boys find a game called Zathura which shows flying saucers, rockets, and planets in outer space, with a path of colored squares leading from Earth to a purple planet named Zathura and back again.  They start to, roll the dice, and pick a card.  All of a sudden, the game becomes reality with meteorites, changes in gravity, a defective robot, Zorgon pirates, and a black hole.  Where all do they go?  What happens to them?  And will they ever make it back home? On the last page of the Caldecott-winning book Jumanji, young Danny Budwing is seen running after his brother, Walter, with a game tucked under his arm. Now after twenty years, readers can find out what happens when Danny and Walter play the new game Zathura in which the Budwing boys are taken on the ride of their lives.

There is a little bit of childish horse play, where Walter pulls Danny’s nose and ears and calls his brother a fungus and a baby, and the two boys fight, but nothing really objectionable occurs.  Some people seem to hate the book.  One wrote, “I did not think this book was very good.  The starting was not good at all.  I do not recommend this book to other children.”  Another wrote, “This book definitely does not live up to his other books in my opinion. The story was weak, and even the drawings, which are sometimes the highlight of his other books, were disappointing in Zathura. Perhaps on its own it would be a good book, but I expected much better from Van Allsburg. I do not recommend this book.”  And still another opined, “Please, if I can do one good deed in this life it will be to discourage people into buying this book. This was a terrible reading experience for me and my two bored boys….I was struck by the general ugly nature of it on closer inspection. It is very clumsily written and repetitive. What a dud! Two Thumbs Down!”

Okay, it’s a young kid’s book.  To each his own.  If you don’t like the it, that’s all right, but you don’t have to trash-mouth it.  One person’s trash may be another’s treasure.  Kids who love anything space-related should enjoy it.  Most people seem to feel that the illustrations are beautiful and somewhat wistful, in the same odd way that Van Allburg’s other books tend to be.  Publishers Weekly says that “grouchy Walter comes to appreciate his little brother,” and that “Zathura, like Jumanji, is a satisfying enigma.”  The School Library Journal notes that “the boys find their way to teamwork and even affection.”  A 2005 American science fiction adventure entitled Zathura: A Space Adventure film, directed by Jon Favreau and starring Josh Hutcherson, Jonah Bobo, Dax Shepard, Kristen Stewart, and Tim Robbins, is loosely based on the story.  Unlike the book, the film contains no Jumanji material and mentions no Jumanji events.