Posted on March 12, 2018 by homeschoolbookreviewblog 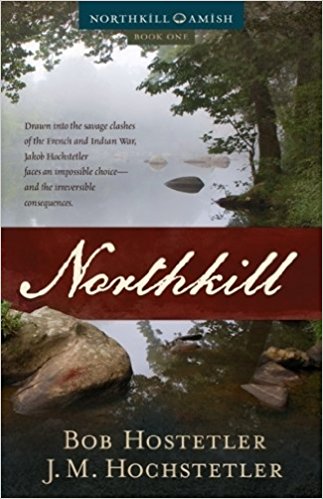 Hostetler, Bob, and‎ Hochstetler, J. M.  Northkill (published in 2014 by Sheaf House Publishers, 1703 Atlantic Ave., Elkhart, IN  46514).  As the story opens in 1752, forty year old Jakob Hochstetler, who had emigrated in 1738 with his family from Alsace in Europe to the New World colony of Pennsylvania, lives in the Northkill Creek Amish community with his wife Anna, seventeen year old daughter Barbara, and sons twelve year old Jakob Jr. (Jake), ten year old Joseph, and six year old Christian (Christli).  His older son Johannes is married to Katie, has a baby, and lives nearby, but Jakob and Anna’s baby daughter Freni has died.  The Hochstetler families are doing well, and everything seems to be at peace.  Yet, there are rumblings of possible trouble coming with the French and the Indians.

By 1757, Jakob and Anna have a new baby daughter Annali, the boys are growing into young men, and Barbara has married Crist Stutzman.  However, war has erupted.  One night, after a party at the Hochstetler home, Indians attack, burning down the house.  Anna, Jake, who was injured, and the baby are killed, while Jakob and the other two boys are taken captive.  Will the homes of Johannes and Barbara also be attacked?  Where are Jakob, Joseph, and Christian being taken?  And can they survive the ordeal and make it back home?  This book is historical fiction based on true events which happened to the authors’ ancestors and are well-known among the Amish and Mennonites.  Thus, it gives a good picture of a little talked-about time in American history.

There are a few references to smoking tobacco, and some of the descriptions of killing, while not overly graphic or gratuitous, may be a little intense for young children or extremely sensitive people.  However, Northkill is a story filled with suspense and drama in which faith in God plays an important part.  It will easily keep the reader captivated to the end.  The book, whose plot has been documented by many publications, contemporary accounts preserved in the Pennsylvania State Archives, and private collections, was the winner of ForeWord Review’s 2014 INDIEFAB Book of the Year Bronze Award for historical fiction.  It is Book 1 of the two-volume “Northkill Amish” series and ends right in the middle of the account.  The sequel is The Return.

This entry was posted in Uncategorized. Bookmark the permalink.