At the Back of the North Wind

Posted on April 30, 2018 by homeschoolbookreviewblog 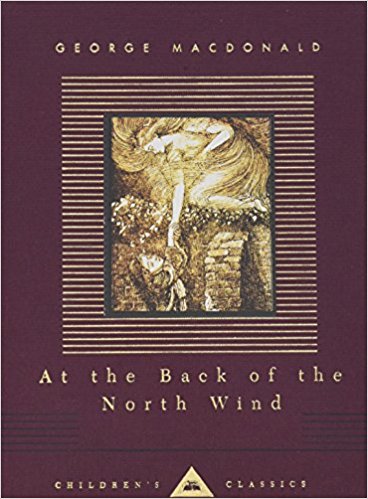 Book: At the Back of the North Wind

MacDonald, George.  At the Back of the North Wind (originally published in 1871; republished in 1983 by Logos Books, an imprint of Bridge Publishing Inc., 2500 Hamilton Blvd., South Plainfield, NJ  07080).  Little Diamond is a young boy who lives with his father Joseph and his mother Martha in a low room over a coach-house in London, England.   Joseph is a poor coachman for the Coleman family and named his son after his favorite horse, Old Diamond.  During the course of the story, a baby brother and a baby sister are born.  After Mr. Coleman is ruined financially, Diamond’s family must move in London for Joseph to work as a cab driver for Mr. Stonecrop, but they and eventually go to live in the country at Kent where Joseph is once again a coachman, this time for Mr. Raymond.  Along the way, they adopt a girl named Nanny and a lame boy named Jim.  Initially, Diamond sleeps in the loft over the stable, right over the stall of Diamond the horse, and in the wall by his bed there is a knothole, through which the North Wind blows. In Diamond’s dreams (or is it more than just dreams?), the North Wind is a radiant, maternal spirit who takes the shape of a beautiful woman with long hair and sweeps Diamond away on nightly adventures.

Once Diamond becomes very sick and is taken by the North Wing to a distant land “at the back of the north wind.”  His life is transformed by a brief glimpse of that beautiful country.  With the knowledge he learns there, and the wisdom he brings back to this world, he brings startling truths to those around him, but he also makes joy everywhere he goes by fighting despair and gloom.  Yet he goes his own way, both showing practical initiative and surprising people by fanciful ideas. Even adults are challenged by his probing questions and penetrating answers.  He’s naive in some ways, and yet also wise and philosophical far beyond his age. Some think he’s not quite right in his head; but he never takes offense.  What did Diamond learn “at the back of the north wind”?  How does it affect his life, his family, and his friends?  And will he ever get to go back?  George MacDonald (1824-1905) was a Scottish author, poet, and Congregational preacher who retired in 1853 and earned his living by lecturing and writing.

This Victorian fairy tale is an allegorical treatment of life and death.  It was serialized in the children’s magazine Good Words for the Young beginning in 1868 and was published in book form in 1871.  The plot, including the fairy tale “Little Daylight,” which has been pulled out as an independent work, combines the invention of an ethereal fantasy landscape with a Dickensian regard for the working class of mid-19th-century England.  The North Wind seems to be a representation of Pain and Death working according to God’s will for something good.  According to MacDonald’s son and biographer Greville MacDonald, there are many similarities between Diamond and MacDonald’s own son Maurice, who died young. Diamond seems to represent Christ, always trying to help others while not completely belonging to this world.  MacDonald’s writing is credited with providing the first step in the conversion from unbelief to Christ of C. S. Lewis, who called MacDonald “the greatest genius of his kind.”  The original 1871 edition had handsome illustrations by Arthur Hughes, but my edition has new illustrations by Jim Fitzgerald.