The Westing Game: A Puzzle Mystery

Posted on May 30, 2018 by homeschoolbookreviewblog 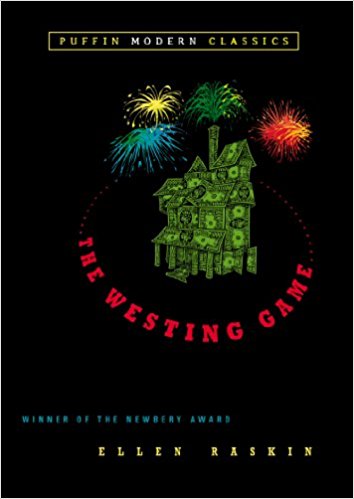 Recommended reading level: Ages 8 and up

Raskin, Ellen.  The Westing Game: A Puzzle Mystery (published in 1978 by E. P. Dutton Inc., 2 Park Ave., New York City, NY  10016; republished in 1984 by Avon Camelot Books, a division of The Hearst Corporation, 106 Madison Ave., New York City, NY  10016). Fourteen people are invited by realtor Barney Northrup to move into Sunset Towers on Lake Michigan in Wisconsin:  Jake Wexler, a podiatrist with an office in the building, his wife Grace nee Windsor, and their two daughters Angela and “Turtle;” Sydelle Pulaski, a secretary; James “Shin” Hoo, who runs a Chinese restaurant on the fifth floor, his wife Sunny, and track star son Doug; Mr. and Mrs. Theodorakis, who have a coffee shop in the lobby, and their sons, high school senior Theo and invalid Chris; Flora Bumbacher, a dressmaker; and Judge J. J. (Josie Jo) Ford.  There are also the doorman Alexander (Sandy) McSouthers, 62-year-old delivery boy Otis Amber; frequent visitor and Angela Wexler’s fiancé Dr. Denton Deere; and the cleaning woman Bertha Crow, who also runs a soup kitchen downtown.  The building is next to the old mansion of Samuel W. Westing, a mysterious paper industrialist who had disappeared thirteen years before.

All of the people associated with Sunset Towers have some connection with Mr. Westing, an eccentric, game-loving millionaire who is found dead in his supposedly empty house. Sixteen of them are requested to attend the reading of his will in which he identifies them as his heirs, claims to have been murdered by one of them, divides them into groups of two, gives out clues about who did it to each pair, and declares that the one who wins this last “Westing game” by solving the mystery will inherit his fortune. Who committed the murder?  How will he or she be found out?  And who wins the prize?  The Westing Game was the winner of the Newbery Medal in 1979, the only book classified as a “mystery” to do so.  It is an original work, using a “who-dun-it” approach and character sketches.

There are a few common euphemisms, but the book doesn’t have any profanity or other objectionable language like some of the things written for children lately, other than an occasional “good Lord.”  Die-hard mystery fans will have great fun trying to solve the puzzle like a game of Clue.  Even the casual reader can enjoy the story.   The chapters are only a couple pages each, so it is easy to read.  However, some readers may find it a little confusing and hard to follow as the author introduces a great many people in a short period of time and some parts of the story might seem irrelevant to the overall plot. Of course, the reaction of characters to concealed events and evidence is a common ploy of Agatha Christie, Ngaio Marsh, Earl Stanley Gardner, and P. G. Wodehouse.  The story has an interesting concept with some good moments, but it may not work for those who don’t like slow types of books.

This entry was posted in mystery, Newbery Award Winners, Uncategorized. Bookmark the permalink.