Every Young Man’s Battle: Strategies for Victory in the Real World of Sexual Temptation

Posted on October 15, 2018 by homeschoolbookreviewblog 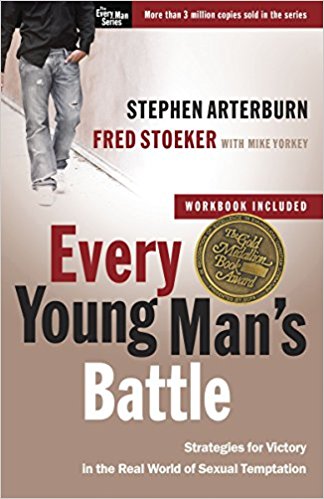 Book: Every Young Man’s Battle: Strategies for Victory in the Real World of Sexual Temptation

Language level: 1 (very frank but nothing profane, obscene, or vulgar)

Arterburn, Stephen, and Stoeker, Fred.  Every Young Man’s Battle: Strategies for Victory in the Real World of Sexual Temptation (published in 2002-2003 by WaterBrook Multnomah Press, 12265 Oracle Blvd. Suite 200, Colorado Springs, CO  80921; an imprint of Crown Publishing Group, a division of Random House Inc., New York City, NY).  We live in a highly sex-saturated society which makes it very easy for just about anyone to fall into sexual sin.  To help people deal with this situation and the problems which it can cause, Stephen Arterburn and Fred Stoeker first wrote Every Man’s Battle.  Then they wrote Every Young Man’s Battle.  Since then, Every Woman’s Battle and Every Young Woman’s Battle have been added to “The Every Man Series.”  I was given a copy of Every Young Man’s Battle to review as part of my research for developing some material to help teen boys and young men in maintaining sexual purity.  Can a young man escape the lure of sexual temptation in today’s world?   Surrounded by sex constantly–in movies, TV, video games, music, and the Internet, is it impossible to stay sexually pure?  How can men survive the relentless battle against the onslaught of lust?  Every Young Man’s Battle shows young men how to rise above today’s debased, self-seeking culture by examining God’s standard, training their eyes and mind, cleaning up their thought life, and developing a plan by exchanging shame and confusion for a positive, thriving relationship with Christ. It includes a comprehensive workbook for individual and group study, comes highly recommended, and has won a Gold Medallion Book Award.

The biggest complaint about the book is that the very graphic examples, explicit information, and suggestive language which it uses could cause more problems with lust than they might solve by introducing images, ideas, and thoughts to which a teen boy had not yet been and need not be exposed.  This is a real possibility for some, especially younger ones.  The authors do spend a lot of time talking about masturbation, proceeding on the belief that all masturbation is sinful or at least to be avoided because it falls into the category of having the “hint of sexual immorality.”  However, some criticisms are perhaps the result of misunderstandings. One person wrote that when one author describes his former sexual sins, “they are obviously ones that he remembers fondly.”  That is unfair; both authors speak of their memories with a very penitent attitude.  Another said, “The reader of the book is made to feel as though every young man is a sexual deviant.”  That is not true, but every young man has the potential of becoming a sexual deviant unless he learns better, and thus all young men need to practice self control.  Still another opined, “The point of saving one’s self sexually for marriage is presented poorly” and “at no point do the authors even mention marital sex as something that is wonderful or good.”  This also is just not so.  And one other claimed, “All of these accounts put blame on the man and only the man for the sexual sin.”  No, but the man and only the man is to blame for his part in sexual sin, regardless of the girl’s actions, and he is responsible for protecting the girl rather than exploiting her for his satisfaction.

In contrast, here is another view.  “I’ve seen a lot of knocks on here for the graphic nature of this book, but for me personally, reading it and applying the strategies and concepts to my own addiction have been life and soul saving. I appreciate that the authors don’t shy away from the graphic details because it shows just how nasty a porn addiction can become (and makes those of us who have gone to some really dark places not feel alienated and alone in the fight). I’m 30, and I could have used this book when I was a teenager. Why? Because they address the very topics in porn and masturbation that my dad was too bashful or naive to talk about. And I was not comfortable approaching him to talk about whether or not I had a problem….Parents, if you’re concerned that the content is inappropriate, read it for yourselves and talk to your son about the strategies.”  My friend Andy Diestelkamp had this to say: “Now, to be fair, I suspect these books may have been intended for men whose pornography issues are deep enough that such descriptions are no longer arousing to them.”  It has been suggested that this book may be more suited for older teens/early 20’s. To sum it all up, while one may not agree with every conclusion and observation in it, Every Young Man’s Battle might be helpful to a young man who is already deep into pornography, lust, and sexual sin but is perhaps not useful for one who has been reared in a more sheltered environment.  For the latter, recommendations include Pure Teen by John Thorington, Hard Core: Defeating Sexual Temptation with a Superior Satisfaction by Jason Hardin, Finally Free by Heath Lambert, Sex Is Not the Problem (Lust Is): Sexual Purity in a Lust-Saturated World by Josh Harris, and Fortify by the nonprofit group Fight the New Drug.

This entry was posted in parenting, Uncategorized. Bookmark the permalink.