Posted on March 13, 2019 by homeschoolbookreviewblog 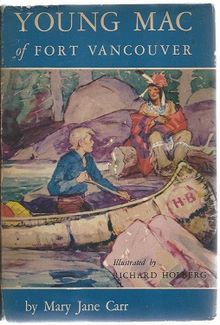 Carr, Mary Jane.  Young Mac of Fort Vancouver (published in 1940 by Thomas Y. Crowell Company, New York City, NY).  It is 1832, and thirteen year old Donald MacDermott, known as Young Mac, lives at St. Andrews in the north country of Canada near Hudson Bay with his mother Bonnie or White Cloud of the Crees.  His father, Big Mac, was a voyageur originally from the Scottish highlands who had died some five years before.  Now, per his father’s instructions, he is being taken by Henri LeGrand, his father’s best friend who became like a foster father to Donald, with the York Factory Express voyageurs down the Columbia River to Fort Vancouver across the Columbia from Portland, OR, but before Portland even existed, in what became the city of Vancouver, WA, where he is to be trained by Dr. John McLoughlin in preparation for further education. But all the young mixed-blood boy wants to do is to become a fur trader like his father.

While living at the fort, Young Mac has a dust-up with another part white and part Indian boy who then seeks revenge.  Also, after helping a young Native American woman who is grieving for her son who had died with the plague, he runs afoul of the local medicine man, Three Gulls. Young Mac is injured while out riding alone, which results in a brush with wolves and then capture and imprisonment by the medicine man.  This children’s historical novel by Mary Jane Carr, author of Children of the Covered Wagon, recounts the adventures of a son of the fur trade, whose father was a trader and whose mother was an Indian woman.  It was a Newbery Honor recipient in 1941.  There are some instances of smoking pipes, but it is clear that Donald has been raised to pray and seek divine guidance. There are a few scary moments, but the worst comes from the risk of the wolves, and plot is set against an authentic historical and factual background of a period when British, Russian, American, and Indian influences all crossed staves.

One reviewer wrote that it is “great historical fiction, set in the Pacific Northwest, very coming of age in a wonderfully angst free way.”  The book shows respect for the Indian people of the Pacific Northwest.  There are encounters with Native Americans (several nations, including Chinook, Multnomah, Umpquah, and many others mentioned), both positive and negative, and the Native American characters are almost entirely as multi-dimensional and non-stereotypical as the white characters.  Yet, there are those who feel that the author finds them to be somewhat inferior and gives a strong message that European culture is better than Native American culture.  This is probably why it has not been reprinted. Another reviewer noted, “Readers who want to learn more about the development of the Pacific Northwest will…find a sympathetic if clear-eyed view of the Native American cultures from that region, too. Political correctness, thankfully, hadn’t been invented yet.”  At the same time, still another reviewer said, “A bit too much Native-American spiritualism for my taste,” but summed it up by concluding, “However, the writing is good and the story definitely grabs your interest.”  I agree with that conclusion.