Posted on March 24, 2019 by homeschoolbookreviewblog 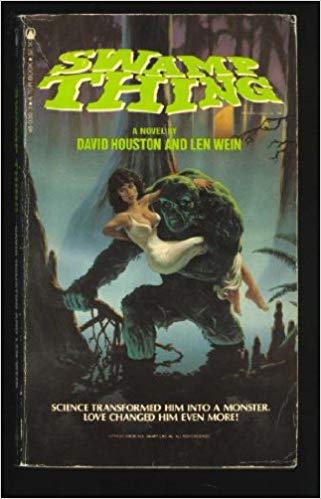 Houston, David.  Swamp Thing (copyright 1982 by Swampfilms Inc., and published by Tor Books, an imprint of Tom Doherty Associates, 8-10 W. 36th St., New York City, NY  10018).  After a scientist is mysteriously killed while assisting a top-secret bioengineering project in the swamps of the American South, government worker Alice Cable arrives at the bogs to serve as his replacement. Her guide, Charlie Tanner (or Thaxton) who is the project administrator, introduces her to Harry Ritter, the project field supervisor, and tells him a rumor about an evil paramilitary leader named Anton Arcane, who intends to hijack their operation.  However, there is another rumor that Arcane is dead. Alice introduces herself to Dr. Linda Holland and her brother, lead scientist Dr. Alec Holland, who are working on glowing, hybrid plant and animal cell concoction with explosive properties.  That night, a group of paramilitary agents led by a man named Ferrett attack and raid Alec’s laboratory. Ritter steps forward, but pulls off his mask and reveals himself as Arcane. When Arcane shoots Linda for attempting to escape with the formula, Alec grabs the beaker, but trips, causing the spilled chemicals to set him on fire. He runs outside, dives into the swamp to extinguish the flames as a series of explosions burst from the water, and is presumed dead.  Cable is also presumed dead in the ensuing explosion and fire but escapes with the last notebook detailing the Hollands’ work, and hides out in the swamp with the help of a young gas station attendant, Jude. However, Arcane learns of this and sends his men to capture her.  Suddenly, this Swamp Thing, which looks like a person but seems made of plant material, appears and scares the pursuers away, immune to their gunfire and even able to stop their jeep dead in its tracks.  Who is the Swamp Thing?  Where did it come from?  What does it do?  And will Cable ever escape?

Swamp Thing began as a fictional character and superhero in comic books published by the American company DC Comics, created by writer Len Wein and artist Bernie Wrightson,  The character first appeared in House of Secrets #92 (July 1971) in a stand-alone horror story and then returned in a solo series. Outside of its extensive comic book history, the Swamp Thing has inspired two theatrical films.  Its expansion into media outside of comic books began with his first eponymous film in 1982. Directed by Wes Craven, it starred actor/stuntman Dick Durock as the title character along with Adrienne Barbeau and Louis Jourdan.  This book is a novelization of the movie.  I don’t have a category for “horror,” although I have read both Mary Shelley’s Frankenstein and Bram Stoker’s Dracula, so we’ll just call Swamp Thing science fiction.  I probably never would have picked it up, but I was in a thrift store that was selling paperback books for 25 cents or ten for a dollar; I had nine and needed one more, so I chose this one.  Just before I finished the book, I watched the movie to see how close they were.  The novel pretty much follows the film but does add some extra details.

This could have been a good story for those who like such things, but some warnings are in order.  There is a large amount of cursing (the “d” and “h” words) and profanity (the terms God, Lord, Jesus, and Christ are all used as exclamations) and even some vulgarity (the “s” word occurs several times).  The movie had some cursing and profanity and one possible vulgarity but not nearly so much as the book.  A few sexual references are found in the novel which are not in the film.  And while the movie certainly has a lot of violence in it, the descriptions of violence in the book are actually more graphic than what is shown on the screen.  If one is willing to stomach all of that, there is an interesting plot. Durock amd Jourdan reprised the roles in the sequel film The Return of Swamp Thing, along with Sarah Douglas and Heather Locklear. Produced in 1989, directed by Jim Wynorski, and having a lighter tone than its predecessor, the sequel was much lower in budget and met with significantly less success than its predecessor.  Peter David wrote a novelization of the second film. Disappointed with the script, David rewrote large chunks of the story. To his surprise, the producers enjoyed the changes and allowed the book to see print as-is.

This entry was posted in science fiction. Bookmark the permalink.