Posted on March 31, 2019 by homeschoolbookreviewblog 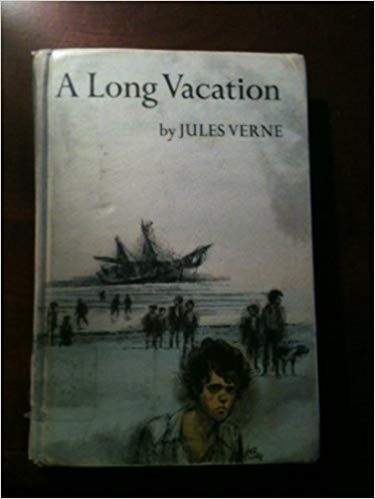 Verne, Jules.  A Long Vacation (originally published in 1888; republished in 1967 by Holt Rinehart and Winston, New York City, NY).  It is March of 1860, and fourteen boys from the elite Chairman School in Auckland, New Zealand, plus a cabin boy named Moko, all aged between eight and fourteen, are spending the night on board the 100-ton schooner Sloughie, prepared for a six week summer cruise.  They have names like Iverson, Dole, Baxter, Cross, Webb, Service, Wilcox, Garnett, Jenkins, and Costar. The crew has chosen to stay offshore until morning.  However, that night, the ship breaks away from the dock, drifts to sea, and is caught up in a storm. They survive the storm and twenty-two days later are beached on a deserted island in the South Pacific, which they name “Chairman Island,” where they are forced to live by their wits for two years.  Three teenagers vie for leadership.  Briant is a sturdy, intelligent, courageous French boy, with a brother named Jack.  Doniphant is a brilliant but rebellious English snob.  And Gordon is a practical, diplomatic American mediating between the two.  Which one is chosen as leader?  Will the boys learn to work together to survive?   What happens when seven criminals, who mutineered on the American ship Severn, murdered all the crew and passengers except two, set fire to the ship, and escaped in the launch, are also shipwrecked on the island with a hostage, Kate Ready?  And will the boys ever get home?

Originally titled Two Years’ Vacation (French: Deux ans de vacances), this Swiss Family Robinson type of adventure novel was originally serialized in twenty-four parts between January and December of 1888 in the “Extraordinary Journeys” section of the French Magasin d’Éducation et de Récréation by Parisian publisher Hetzel. It was also published in book form in two volumes in June and early November of that year.  An English translation of the book was serialized in 36 installments in the Boy’s Own Paper between 1888 and 1889.  In 1965 the I. O. Evens version of the Sampson Low translation was published in England (ARCO) and the U.S. (Associated Publishers) in two volumes, Adrift in the Pacific and Second Year Ashore.  Then in 1967, a new modified and abridged translation by Olga Marx with illustrations by Victor Ambrus titled A Long Vacation was published by Oxford University Press in the United Kingdom and Holt Rinehart and Winston in the United States.

I have always been a sucker for stories about people marooned on an uninhabited island.  Someone said that Verne’s foray into juvenile fiction is “Lord of the Flies without the savagery,” since the boys are all remarkably well-behaved, perhaps because most of them are British. In his preface to the book, Verne explained that his goals were to create a Robinson Crusoe-like environment for children, and to show the world what the intelligence and bravery of a child was capable of when put to the test.  I agree with Kirkus Reviews, who wrote, “Verne, as usual, offers precise characterizations and detail to augment a tale that should appeal to any young adventurer.”  As is true of other books by Verne, A Long Vacation manages to keep us turning pages and is recommended for young teens, particularly of the male persuasion.

This entry was posted in adventure, Uncategorized. Bookmark the permalink.