Posted on May 20, 2019 by homeschoolbookreviewblog 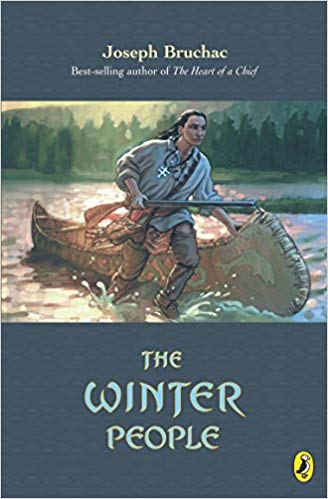 Bruchac, Joseph.  The Winter People (Published in 2002 by Dial Books, republished in 2004 by Puffin Books, both imprints of Penguin Young Readers Group, a division of Penguin Putnum Group Inc., 345 Hudson St., New York City, NY  10014). It is 1759, and fourteen year old Saxso lives in the Abenaki Indian mission village of St. Francis on the bank of the Alsigonitikuk or St. Francis River with his mother and two younger sisters.  His father had been killed a couple of years before in battle.  War is raging in the northeast between the British and the French for control of North America.  Saxso’s people are allied with the French.  One night, while a majority of the men are away fighting, the Bostoniak rangers attack.  Without enough warriors to defend their homes, Saxso’s village is burned to the ground. Many people are killed, while a few escape, but some, including Saxso’s mother and two sisters, are taken hostage.

Now it’s up to young Saxso, on his own, to track the raiders and bring his family back home before it’s too late.  Can he locate them?  Will he, all by himself, be able to rescue them?  Or might he himself be captured?  There is not a lot of good historical fiction for young readers from the period of the French and Indian War, known in Europe as the Seven Years War.  Of course, this book approaches the conflict from the viewpoint of the Indians and their French allies rather than from “our” viewpoint of the British and their colonials, but after all every story has at least two sides, and it is still full of history, danger, courage, and raw survival.

Joseph Bruchac, himself a descendant of the Abenakis, is a highly acclaimed children’s book author, poet, novelist, and storyteller, as well as a scholar of Native American culture.  There is some mixing of American Indian practices with Roman Catholic beliefs, but that is undoubtedly quite accurate from a historical standpoint.  Those who are familiar with the area in which the action occurs may recognize the names of a lot of places mentioned in the book.  It gives a very interesting glimpse into the daily life and culture of native people of the northeastern United States.  This exciting novel is certain to have lovers of adventure on the edge of their seats, from start to finish.

This entry was posted in historical fiction, Uncategorized. Bookmark the permalink.