Posted on June 19, 2019 by homeschoolbookreviewblog 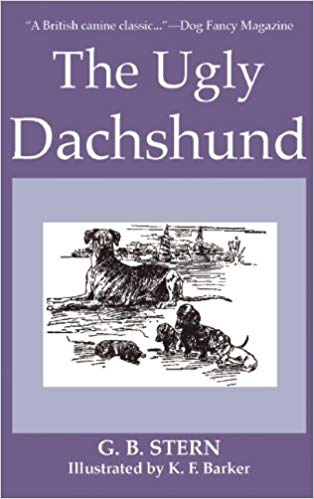 Recommended reading level: Ages 16 and up

Stern, Gladys Bronwyn (G. B.).  The Ugly Dachshund (published in 1938 by The Macmillan Company, New York City, NY).  Tono is a dog who lives with his humans, whom he calls Supreme Legs, Master Legs, Butler Legs, etc., and their other dogs, Elsa, her daughters Eva and Erda, and Elsa’s twin sons Fafnir and Wotan, which are all dachshunds, at the Villa Arabesque on the Mediterranean Sea in the Provence region of south France.  Never having been with any other dogs, Tono assumes that he is a dachshund too.  A Relative Legs brings her dog, a griffon named Voltaire, for a visit.  Then a Highly Insured Legs moves in next door with her mixed-breed movie star dog Dulcibel, with whom Voltaire falls in love.  Tono is almost heartbroken because he is not held, cuddled, carried, pampered, and otherwise treated as the others are.

Then when Tono, taking a message to Dulcibel one night from Voltaire, mistakenly attacks a shadowy Dalmatian thinking that he is protecting Voltaire’s love interest and gets severely punished, he despairs and tries to drown himself.  Does Tono end it all?  How can the Legs get him to reconsider?  And what does Tono learn about himself in the process?   This 1938 novel by Gladys Bronwyn or G. B. Stern (June 17, 1890 –September 20, 1973), who wrote many novels, short stories, plays, memoirs, biographies, and literary criticism, is considered one of the few unsentimental dog stories.  It was the basis for a 1966 American comedy film of the same name directed by Norman Tokar, written by Albert Aley, produced by Walt Disney Productions, and starring Dean Jones and Suzanne Pleshette, which was one of several light-hearted comedies produced by the Disney Studios during the 1960s.

Even though Disney turned it into a family friendly movie, the novel is not for children.  There is a small amount of cursing and profanity, with the “d” and “h” words used occasionally and the phrase “my God” found a few times as an interjection.  While nothing openly vulgar or obscene appears, some references to sex and mating occur along with their implications.  It has been said that the book really is intended as a satire on human nature.  It is an interesting story, but as a result, I would not recommend it for anyone under sixteen.